You can't go back: Honolulu

The Eastside Grill closed this past month.

When I first moved to Honolulu, for the fall semester, 2001, I was trying to adjust to a stunningly beautiful but fundamentally 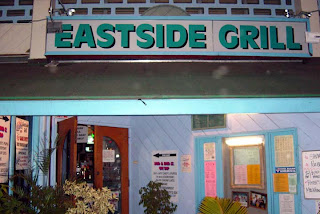 different place, and I was looking for what I learned was called a third space: someplace where I could hang out, get some grub, have a beer, watch football, and be a regular - where I could be at home.

I was talking about this before class one night when a guy sitting behind me overheard and asked, "Eh, you check out the Eastside Grill yet?" I hadn't - but I went that week and it became my living room for the four years that I lived in Honolulu (and that guy, Troy, became one of my best friends).

Some weeks I'd only be at the Eastside once: Sunday, 7:00 a.m., Miller Lites and football. If the Colts were on I'd get there at 6:55 and Robbie, the owner, would point me to the TV where the Colts would be shown. I'd talk crap with the Bills fans at the next table about how bad our teams were, I'd read the Honolulu Star Bulletin I'd brought with me during time outs and halftime, and generally I'd stop at two if I had reading or writing to do (which was almost always).

Some weeks I'd hit the Eastside for lunch and be one of only a handful of clients. I was ha'ole and the place is really local, but I always felt welcome.  I'd sit at the counter and talk with the bartender, usually Shari, who would comp my soda and I'd tip her extra. Occasionally Robbie would be there and we'd talk whatever sport was on. During basketball season I'd come in whenever MU was on and when Robbie saw me in a gold shirt he'd ask me for the channel or satellite coordinates and he'd get the game. During the NCAAs when MU was playing early, before the bar opened, Cuba, the cook, would let me in early while he was prepping, cleaning, whatevers, and let me watch.

When my friend Eva came from Australia to Hawai`i, her first time to the US and to the Islands, on our third night we were trying to figure out the evening's plan and she said "No offense mate, but maybe tonight we could go someplace other than the Eastside Grill?"

I got invited to their holiday parties; fed a little extra when I was a broke-ass grad student; and was always made to feel welcome. Troy and I would often go when he got off work or when I wrapped up a late class, and we'd fill the table with empties and solve the world's problems and make memories to sustain our friendship over future months and miles.

The Eastside Grill was a touchstone to my UH years, and I learned that it closed around my 40th birthday, the same time I was exploring a job opportunity in Honolulu. It made me realize that even were I to go back, I could never really go back, to Honolulu or to any one of the 21 addresses I've had in the 11 cities I've lived in since undergrad. I could write this entry for nearly every one of those addresses, to some degree, but the Eastside Grill and Honolulu still resonates the most.

So, the Eastside is closed. Diamond Head Video, a short ride from where I lived off Date Street - the place Arnold and I stalked around for an hour one night, baked and giggling, looking for a comedy when really anything that night would have been a comedy, and where I got French language movies and lube and advice on which of the new releases were worth it from people who were trustworthy guides - is closed, too. Their whole building, in fact, has been demolished and in its place is now a Super Safeway - bright and clean and sterile. Volcano Joe's, the coffee shop right across from campus, is closed too.  That's where I'd sit and watch the 6 bus discharge the slow moving neighborhood ojisans, and where the St Francis and Lutheran and University High kids would mill around and be so loud that my headphones couldn't drown them out, and where I'd write letters to try to get clarity about how conflicted I was living in Hawai`i and what my next steps might be. Caffe G down in Waikiki, that queer friendly coffee shop where I'd study and write for hours until they kicked me out, has closed, and the dude behind the counter who I hooked up with once has probably graduated and moved on.  And no, Les Murakami Stadium hasn't closed but it's been completely redone and it's selling out now, so Dietra and Jason and I would not be able to sit wherever we wanted (Would we even have time to go?) and the three older local bruddahs who sat on the 3rd baseline and kept up a smart-assed patter all through the games are likely gone as well.

People now would no longer think that I look familiar in Coffee Talk; Tracy, the baker at Town, no longer remembers my favorite scone. My Micronesian neighbors on Mahiai Street - if they are still there - probably don't remember that ha'ole guy they hanai'ed because he spoke four words of Chuukese.  The sweet kanaka lady next door who looked after me and the building, and who'd chat to me as she while she cut the hair of her clients while I'd sit on my back balcony, eyeing the paper and drinking coffee, may have moved on, too.  I even wonder how often Cameron and I would be able to carve out time to go to the gym - if it would be every day, or every other day, like it used to be - or if we'd have time to go get grinds afterword at Rainbow Drive-Inn or Diamond Head Grill. I wonder how often Troy and I would be able to have problem-solving conversations at the Eastside - or wherever our new third space would be.

It wasn't that I was perfectly happy in Hawai`i, or that I think I could only be happy in Honolulu.  But the intersection of people and places are what make up a life, and I guess as I've got 45 in my rear view mirror I'm learning that the trick is to live as much as possible with the people and the places I have now. No matter how much I may love them, once they are gone, that's it - I won't get them back. So, aloha Eastside, and Robby and Shari and Diamond Head Video and Caffe G and Town and all of the other places in Honolulu that made my time there mine - and that brought me the people who remain so important to me. And aloha kakou to the third space/ living rooms and staff holiday parties and sweet neighbor ladies and coffee shops suitable for letter writing to come in my future. Lots more of my life is to be made up, and I the goal is to value the present moments as much as those in the past.
.
Posted by Bren in SoCal at 2/08/2009 02:47:00 PM

Damn, B, you're good at catching detail and feeling. I've never been to Hawai'i, but you took me there. Cheers!

Excellent post. I think about this kind of thing all the time. For easily a good two years after I left Japan I constantly thought about going back. Even though the desire was strong, ultimately I realized that going back to a place is not the same as never leaving. It would not be the same as I remembered it and I would never recapture the aspects of it that I miss. I wonder if the Oz bar is still open? I hope it is.

Place and people are very important. And you make us feel it too.

But you can and should come back. Miss you!

Well, it looks like we have time for the both of you, but the Bows will be off island:(