I've said for years - at least since a circa 1997 discussion with my father - that future generations would look back at us with the smug disdain we reserve for Madam Antoinette. Is Bernie Madoff our "Let them eat cake" moment? I've thought and written and wondered for years about the insustainability of our lives and the pace at which we have consumed natural resources, to the point where in 2001 a friend threatened to make me a shirt that said "When your kids don't have any natural resources..." Thomas Friedman wonders, with many others, if this is when we finally stop the depletion? 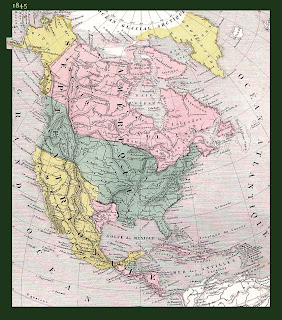 Despite all of these changes, some less than a century ago - I think that the way things are now is the way maps will continue to look.

I'm thinking about this - permanence, change, and my self-indulgent belief in the inevitablity and permanence of the extant - as I've just finished reading The Dominion of War: Empire and War in North America, 1500-2000. The shape of things now was not pre-ordained; of course not. A bullet a bit further to the right and Washington would have been killed in the Battle of Monongahela; the U.S. could quite conceivably have been three nations, or five with one German-speaking, or none; Pittsburgh and Chicago could have deep French roots and a francophonic minority well into the 20th century, along with New Orleans; all could be French to this day.

At a thousand - a million - different points in history, a man or woman could have made a different decision and the trajectory of the future would be significantly different. This is hardly an original thought - H.G. Wells, Marty McFly, the Simpsons, The Terminator, Douglas Adams, and many, many others, have all played with the same point - but I forget that it applies to my life.

Are there events in my life that will have affects for the next century? What are they?

There is no way of knowing, of course, or if they are happening in our lives. Most of human history has - which means most humans have - plodded along, living and dying, without affecting too much beyond their immediate villages or families. But there are points in the sweep of history when that's not the case. Is now one of those times?

It is tough to think about choices we make impacting history. Obviously I think about how my choices have impacted my personal history, but history in general, not so much. How would my life be different now if I had stayed in Japan? Important to me personally, but in the big historical picture, not so much. Although, I suppose on an environmental level how our choices will impact history is something that many of us *are* thinking about. A given for me my whole life has been that of course a store will give me a bag for my purchases. Recently, I have become pretty good at bringing my own bags.
I am not sure what the world will look like 200 years from now, but I hope it includes flying cars. I always thought the way the Jetsons lived seemed pretty good.