It looks nice, right, my 2007 Pontiac G6? Your basic, American sedan, maybe with tinting a little darker than some on the back windows, but it's nothing out of the ordinary, right? 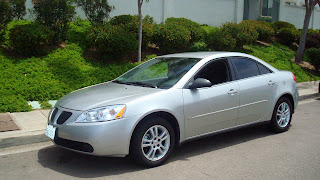 She's cursed. I call her Christine, because she's cursed, like the car in the horror movie. Okay, she hasn't killed anyone yet, but she has had an improbable string of bad things occur, to her or while I was driving her, and last night's is just the icing on the cake.

Let me back up to the night I bought her. As I was driving home, thrilled to have my G6 finally, a car I'd coveted since they first came out, and yet worried as I re-played the five hour negotiations in my mind that I'd paid too much, or signed too many documents, or got played like a mandolin at a bluegrass festival, the engine light comes on.

"Great," I think. And then I thought "You have GOT to be f&$%in' KIDDING ME!" Actually, I didn't just think that; I shouted it. Aloud. More than once. "Sunuva gun why didn't I pay the $300 for the protection that lets you change your mind in California for any reason whatsoever, no harm, no foul, and return the car within three days?" was also a thought.

Well, that ship had sailed and I was stuck with her, so whatever, I have to take her back to the dealer. Tomorrow. They were closing as I drove off the lot. Natch.

But I'm hungry - I'd been at the dealer lot for hours, dickering and walking away and calling my insurance agent (more on that soon), so before I go home I go to Arby's for a couple of skin graft sandwiches. Nothing says "new car" like "gross fast food." I'm in line in my new car at the "drive-thru," which is unlike me to start with (ask my friend Menelek who I made get out and go in with me every time we'd make a lunch run), and the woman in the red Honda Accord in front of me has never, ever, seen an Arby's menu before. Or a "drive-thru." Or, apparently, a speaker. She's bellowing into the night (it's 21:56 and they close at 22:00), and not particularly towards the speaker but in circles, more like someone making a cruel parody of an advanced Parkinson's patient, as if the speaker were not, in fact, stationary and right in front of her, "How much for just the fries?" which was followed by, and I'm not exagerrating here, a good 20 second pause. "Uh-huhn." Palate searching pause. "And what if I just get the sandwich, how much for just the sandwich?" Arithematically needed pause. "Uh-huhn." Oddly reflective pause. "And if I get them both together?" Inquisitive pause, followed by a second pause for growing delight, and then "Oh! You have shakes!?"

And my thought bubble is "Oh for F&%$'s SAKE, you've got to be effin' KIDDING me right now!" I'm buzzed from spending the money I've just spent on a car with an engine light on (I'm not used to spending money like this), and my blood sugar has crashed because I haven't eaten since breakfast 12 hours ago (at the Old Saw Mill), and I'm a little shaky and a little light headed and a lot hungry.

What would you have done?

Yup, I decide to abort the "drive-thru" run in favor of "dine in."

And nope, there's no room to pull out of the "drive-thru" between me and Pausilla.

Yup, I put my brand new, less than two-hour-old car into "R," glance at my wing mirror, and back up.

Yup, I back right into the '86 Mitsubishi that had been parked in one of the spaces when I got in line at the "drive-thru," making a sound that no owner of a two-hour-old vehicle wants to hear. My head spun. "I was only going maybe 5 mph, it won't be bad, you can walk away from this, it'll be fine, you're good!" I had managed to do noticeable damage to her bumper.

I've never had a wreck with another vehicle before, so I don't really know what to do. I take her info, take pictures of it with my cell phone, give her my info,

and wonder if she's really going to want to pursue this. I mean, her car is pretty banged to hell. It's been customized on both sides with dings and scrapes, and it's an '86 (the same year as my beloved Cutty so I knew exactly how old that car was), but it's absolutely my fault and I have insurance and it's absolutely her right to get it fixed, so we swap info and I calm down and try to go "dine in" at Arby's, forgetting that it's closed. I try the door. It's still closed. Oh, but look, the "drive thru" is open until 11:00. D'oh! I get BACK in the drive-thru, make my order, look for my phone, can't find it, pull far enough away from the window with my sack o' skin graft sandwiches that I can open my driver's door and THERE'S my phone, on top of the car, retrieve my phone, settle back into the seat, take some more deep breaths, get back in the car, and drive slowly and carefully home.

The next day I call my insurance agent, who asks, helpfully, "Um... didn't you just buy this yesterday?" But she took care of it all (thank you, State Farm!) and my premiums never went up, so I'm not sure what happened. (Christine's bumper was fine, by the way - just a little scratch. Well, from this incident.)

But, remember the engine light? So I also call the dealer who can't get me in until Saturday (natch), until I say that I bought the car YESTERDAY and the engine light is on, so they will take me TODAY. So they take me that day, they run a diagnostic, and they tell me it's got a defective catalytic converter. It's a year old. I got it used, yes, but it's a year old. Well, I'm on the hook so what can I do? They say they'll fix it for free and they gave me a 2008 G6 loaner, with all the bells and whistles, and the realization I had the night before - that what I bought wasn't maybe as cool as I thought - really started to sink in more deeply, and settle in like that bad college buddy in the movies into a newlywed couple's couch. It wasn't looking like moving out anytime soon.

My car has no rear fin. The stereo doesn't tell you what song and artist is currently playing. There's no jack for an MP3 player. No moon roof. No owner's manual. No cruise control. (Which I noticed last night, as I was driving home from the lot on the 163, and here's how that went in my head: "The cruise is on the stem. The cruise is on the stem. Where's the cruise? No cruise control? Is that even possible?!? How does it not have cruise control!? What... how is that even possible?! HOW DOES GM MAKE A FOUR DOOR SEDAN IN 2007 WITHOUT CRUISE CONTROL!?!" Yes, of course I should have noticed that before I bought it, but come on... isn't that pretty standard?) I'm running through this list in my mind, with my loaner, and feel, I'll admit it, a little sad when I get a call the next day that Christine is ready to be picked up. So I go get her, and turn in my shiny, be-whistled and be-belled loaner, and drive home.

OMG--this is hilarious! I had tears in my eyes from laughing so hard! The bit about the lady in the drive-thru killed me. Ahhhh, funny stuff!

"Pausilla" made me laugh so hard I felt a new muscle group in my stomach that pilates has revealed. There should be a name for the condition we get when we drive a new car home. We're giddy, we're stupid and we think everyone on the road knows. Virgin-driveicide?

Sorry to say but you got fucked. I thought I got fucked. Maybe we both got fucked. You raw. Me, with lubrication; the lubrication being my g6 displays the name of the song being played(radio only), and it has cruise control. I bought it used so I do not know if it's standard. I just don't think the g6 is worth the 20 g's i will have paid for it over the next 6 years. The good thing, it's American. Good luck.