I'd bought it to be a beach blanket, and it was already in the trunk. I saw it when I threw my bag in the trunk, my new orange blanket from Ikea with the unpronounceable Swedish name, as I left for school visits in San Luis Obisbo and Santa Barbara. On my way back to LA that day in 1999, I pulled off the 101 in the brilliant afternoon sunshine to hit the beach.

I took it down to the sand, threw it out, anchored it with my slippahs, and stretched out in the balmy sunshine. At the end of my reading material an hour later, I started to pack up, mindful of when I'd hit LA traffic, and that's when I saw it: big black gobs of goo on my feet! I was shocked - so shocked that it took me a while to realize what the big gobs of black, gooey stuff could be. I scrounged around for a stick and scraped off as much as I could, and then went into the surf to try and get the rest off. But it wouldn't come off! I kept stepping in more, and now as I looked it was everywhere. I'd rub my feet on rocks and with the stick to get the globs off, but my feet were stained, and no matter how much I scrubbed with sand and sea water, and no matter much kept coming off, there was still more. After about 20 minutes I declared my feet clean, but then I noticed my slippahs were covered - so I repeated the process and got as much off of them (new stick) as I could and put them back on, recontaminating the soles of my feet with what I couldn't really get off from the decks of my slippahs. I then shook out my blanket and saw the globs there! I shook out the sand, balled it up and trudged back up to my car, feeling violated.
Later at the Goleta Coffee Company for a post-beach fuel-up, I struck up a conversation with some locals, told them about the tar, and displayed my raw and rubbed-red feet, still stained. They confirmed my suspicions - it wasn't tar, it was crude oil. From a spill off the coast. In 1969, 30 years earlier.
Before I got home I stopped at a hardware store for turpentine, used my t-shirt as a rag to clean up my slippahs and my feet, and tried to get the 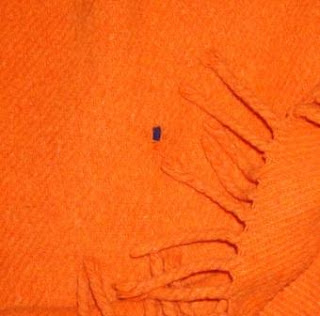 worst of it out of my beach blanket. Finally I realized the only thing to do was to cut it out of the material so it wouldn't keep spreading onto other surfaces, so I did (right). My trip to the beach had cost me a t-shirt, a can of turpentine, a few hours of cleaning time, and a hole in my new Ikea blanket. Despite my best efforts, I suspect someone at Avis had a helluva time getting the brake and gas pedals clean.
All this from an oil spill that happened thirty years earlier.
What's going to happen in the Gulf of Mexico? What's going to be the effect in thirty years on the beaches of Louisiana, Mississippi, Alabama, and yes, Florida and Texas? What's going to happen to the fisheries and shrimp grounds and to all of the people who depend upon them for their livelihoods? I heard President Obama say today that BP is going to be on the hook for the cost, but what cost? In 30years is BP going to pay for a beach-goer's turpentine, t-shirt and beach blanket?

There is simply no way to pay for the costs of an oil spill like the one happening right now 5000 feet below sea level on the floor of the Gulf of Mexico. The costs are incalculable. And until all the costs - ALL the costs - of a petroleum based economy are captured at the consumer level, then we will make irrational decisions about our energy consumption, and keep buying artificially cheap gas and the cars that burn it.

When I pay $3.12 for a gallon of gas up the street at the Shell station, that does not cover the costs of the oil spill in the Gulf of Mexico, or the defense budget it takes to ensure enough supply, or the long term effects that my using that gas will have on a warming environment, or the asthma of a child in Long Beach who is growing up downwind of the harbor and who breathes in bunker fuel exhaust from an ocean tanker bringing in raw crude oil to the refineries in Wilmington.

What is the real cost of a gallon of gas? It's nearly mpossible to calculate.

When President Obama earlier this year signalled that he was going to open parts of Alaska, the Atlantic seabed, and additional areas in the Gulf to oil production, I was deeply disappointed and I thought strongly that it was the wrong policy - but I understood the motivation. What are we supposed to do? We burn the stuff, and we burn more than we have. What are we supposed to do? What's the solution? Use less and switch the hell off of it before we destroy the planet, bankrupt ourselves in favor of some of the worst people in the world, and run out, sure. But even if we all decided tomorrow that was the right course to pursue - and we won't, but even if we did - it will take decades to get there.

When I had that experience back in '99, I was annoyed (and for several days after I kept that tshirt and turpentine handy, as there was a lot of "how did oil get THERE?!") but smug. I didn't own a car, so I was not part of the problem. Never mind that I sure used jet fuel, that I rented a car for work purposes for over half the weeks of the year that didn't run on fairy dust, that I bought consumer goods and foods made all over the world that were flown or shipped in to my local store - I was not part of the problem.

I was wrong then, and my smugness embarrasses me in hindsight. The worse thing is that I'm an even greater part of the problem now. I drive everywhere. My bike got stolen and I almost never take the train anymore, even though it goes to just a few blocks from work. I still fly an awful lot - I'm dating someone in Georgia, for the gods' sake!

I remember feeling a little sick after I realized what I'd stepped in on that beach in 1999, and that it had washed up from thirty years before. I wondered how many decades it would take for that washed up oil to really be "cleaned up." After I'm gone, it's safe to say, is one answer.

By the time hurricane season comes, in just twenty eight days, with possible onshore storm surges pushing Gulf seawater - and crude oil - miles into the delicate estuaries along the coast, and winds of more than 70 miles an hour lifting Gulf seawater spray and foam - and crude oil - and blowing it miles and miles inland, maybe the spill will have been "cleaned up." Maybe by then the leak will have been stanched, and the 200,000 gallons of crude oil currently shooting into the Gulf everyday from an oil deposit another 18,000 feet below the sea floor will have been greatly diminished, or stanched all together. Maybe it will be a hurricane season like 1980, when no storms hit the current spill area.

But I'm not particularly hopeful.

There's no question that it's the Louisiana and Mississippi Gulf Coast residents who will pay a disproportionate share of the damage, whatever damages turn out to be, and that my $3.12 a gallon isn't going to begin to cover the cost. And all that crude oil, floating on the water - getting stirred up by winds, suffocating even more of the Gulf of Mexico ecosystems - means that a lot more than crude oil is going to be all washed up.
Posted by Bren in SoCal at 5/03/2010 06:30:00 AM

My first thought was "hey, I think we took that orange blanket to the beach when I visited you in LA."
My second thought was "I am officially a terrible person."
Tragic situation.

How is it that there is still no solution to this problem? It has been over a month, and I just read that their latest attempt to plug the well, which involved "heavy fluids and junk", has failed. Aren't there any engineers with better ideas than that? Heavy fluids and junk? Really? That's what was going on in engineering classes? And now the latest idea is "submarine robots" (!) but that will take at least 2 months to realize.
So is this the way the world ends? Because it looks like that well is going to spill and spill and spill until it runs dry. Not with a bang but a whimper indeed.