Valentine to a Friend

Note: this post originally appeared in a shorter form in the February, 2013 Valentine's issue of Kraven magazine.

“I can’t make it tmrw night.  Haven’t said anything to ppl but have some health stuff and have tests at hosp tmrw. Rain check?”

That was the text on November 13.  I was in Seattle for business, hoping to grab a quick drink with my friend Cheryl, a woman I’d known since undergrad.  I texted her back that I wished her well, was sorry that I wouldn’t get to see her, and totally understood.  I was concerned, of course, but I didn’t push it.  I’d been planning to come back up and see her for a longer visit at some point over winter break, or if not then for sure in early January.  She had occasional work in SoCal, too.  I’d see her again soon.

In his book “Illusions” Richard Bach wrote: “Your friends will know you better in the first minute you meet than your acquaintances will know you in a thousand years.”  Cheryl, unquestionably, was a friend.  I don’t remember exactly when or how we met, we’ve always just “known each other better.”

Despite that, despite the way we knew we’d be – or that we’d hoped we’d be – lifelong friends, it takes effort to sustain a friendship over the years and the miles.  One night at the Gym Bar in Milwaukee, Cheryl turned away from the pool table, cue in hand, looked right at me, and sang along with the Damn Yankees on the jukebox: “Don’t say goodbye / Say you’re gonna stay forever…”  I had just accepted a job in Denver.  I don’t know if I really want to go, to take that job, but that’s what I had been taught that people did – they left and went and made their way in the world.  I left.

I came back to Chicago two years later and reconnected with Cheryl and our group of friends, and she helped me move, twice; drove me back and forth between friends’ and families’ places for weekend barbecues and parties; and played Yahtzee at Hooligan’s bar on football Sundays, her with one eye on the Bears, me with one eye on the Colts.

Finally we both ended up in the Bay Area – she first, so I called her to talk about San Francisco and where I should look for apartments when I learned I’d be transferred.  She immediately said, “I have a two bedroom – stay with me.”

If anyone else had offered, would I have said yes?  I’m not sure. I was a little reluctant, but I decided to take her up on it.  In part, I accepted because she had always been a strong proponent of "clear and direct communication" and I knew she wouldn't have offered if she hadn't meant it.  In part, I accepted because I missed her and it would be great to get time together like we hadn’t had in years.

I ended up staying with her for two months.  She showed me the City, taught me lessons about driving around in it (“Never get behind a Zip Car, they always have terrible drivers” and “Valencia.  Always.  Nothing good ever happens from Mission.”), taught me from which bar and which bartender to get a good Bloody Mary, taught me where to go to watch the games.  She took me to the Pilsener, which she correctly predicted was “your kind of gay bar.”  She took me to museums on her passes and to movies with her friends. She introduced me to her San Francisco circle, who figured if I was a friend of Cheryl’s then they were going to take me in despite my professed love of LA and a lack of fashion sense.  We stayed up watching the Food Network and then woke up the next morning hours earlier than planned, starving, on a hunt for pancakes.  We went to Twin Peaks, both the bar and the scenic point.  We watched the fog roll into the Bay from her Noe apartment until the ports were covered, until the lights at AT&T park were occluded, until Oakland seemed a world away.

Her hospitality and friendship meant the world to me.  I deeply resented that transfer; I felt like I was hitting my stride in San Diego, like I could have put down some roots, and I didn’t want to live in cold, expensive, pretentious San Francisco.  But without that transfer I wouldn’t have had that time with Cheryl.  I wouldn’t have learned about the City, or have grown to love it.  I wouldn’t have found the Valley Tavern, where she and I, even after I moved out, would sit for hours every Sunday, watching football at the end of the bar in front of our “lucky” TVs, passing parts of the Chronicle back and forth, talking about our boyfriends, our jobs, our families, our mutual and separate friends.

We wouldn’t have renewed our friendship to the point that, on New Year’s Day a few years back as we sat around her apartment in recovery mode, contemplating and discussing the time behind us and in front of us, she was moved to say, “I’m really glad we reconnected while both of us were here in the Bay Area. It’s one of my favorite things from this past year.”

Cheryl was never demonstrative – this was as effusive as she got.  I concurred, even as I was surprised that I choked up by how it caught me.  It was one of my favorite things, too.  It had given us momentum and reminded us of why we were friends, of how we “knew each other better.”  I got to learn again about her loyalty to me and to everyone important to her.  About her generosity as she took me in and as she always over-tipped.  About her sense of justice, as she would start to fume when reading the paper about someone who had been wronged, or as she fumed about the Prop 8 case.

One Sunday at the Valley, sitting there, talking about the things we’d like to do together that we’d talked about before, I felt the need to plan.  I grabbed a bar receipt, turned it over, and made a list that I am looking at now on my bulletin board. 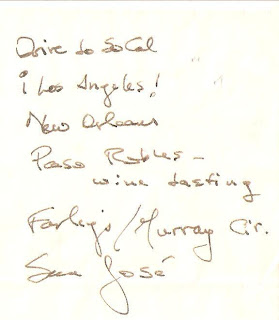 We thought then that we had all the time in the world to cross off its items.  Why wouldn’t we?  A weekend here, a weekend there, we could knock out the list in 18 months, tops.  It wasn’t particularly ambitious – no international travel, for one thing – so we’d have time to accomplish them.

That time I had with Cheryl – those two months I lived with her and the two years we overlapped in the Bay Area before she pursued a great new gig in Seattle – that was time that I hadn’t been looking for and that I hadn’t expressly wanted.  I didn’t want the transfer, Ididn’t want to leave SoCal, I didn’t want any of it.  But I got them, and I made the most of them – not through any Herculean effort, not because I knew that time was passing, but because I was with a “friend who knew me better,” and who knew how to make everything fun.

Maybe some of that lesson, about how to spend time, inspired me to take a last minute trip to Seattle this New Year’s Day.  I wasn’t scheduled to go until the 11th to see Cheryl in the hospital, but something told me to go up earlier, and on December 30th I bought a ticket.  I landed on the 1st, checked in to my hotel, and went to see her.  Cheryl looked rough but she was awake; she looked at me, recognized me, and made a face that was funny and knowing and all her.

The next night, the 2nd, while her brother ran to the airport to get incoming relatives, it was just me, her sister Diane, and Cheryl. As Diane slept on the cot in the hospital room – the cot on which she’d been sleeping for weeks – I talked to Cheryl, and told her goodbye.  I thanked her for all of the lessons she had taught me – “Clear and direct communication, Brennan,” and how to be a good advocate and how to be a loyal friend and a good many others.  Some of those in our circle of friends who couldn’t make it had called me and asked me to kiss her goodbye for them, so I did.  I told her stories, unsure if she could hear me through the sedation and the pain, but I told them anyway – of how much she had meant to me, of how she had made me laugh, of all of the great conversations we’d had. I told her that I would work on our list, and that I’d think of her when I did.  I told her I’d miss her like hell.  And I softly sang her a line from the Damn Yankees song that she had sung to me twenty years earlier: “Don’t say goodbye / say you’re gonna stay forever…”

The next morning, the 3rd, she died.

It had been six weeks since the night she texted me that she wasn’t going to make it to drinks.  Turns out she had a very rare, aggressive form of cancer, and that six weeks was all she had.

Time is all we have, and we don’t know how much we have.  It’s incredibly precious.

Cheryl spent her time well, there’s no doubt.  She was incredibly talented, and smart and funny.  She lived well.  As one of her family members hugged me goodbye after the funeral dinner, and held on, he talked about how much Cheryl had taught him about life, but especially about people – how people come in all kinds, and how you take them where they are, and how you love them no matter what.

I can’t think of a better way to spend what precious time we have than to try to teach and to try to live that lesson.

So this month, this year, this day, I’m going to try and channel my inner Cheryl.  Clear and direct communication. Defend what and who needs defending. Use time well.  Remind myself that people come in all kinds and that I will still love them no matter what.  And I’m still gonna miss her like hell.

And to my loved ones reading this, if I try to move in with some of you, well, don’t be alarmed.  If it’s not a good time for a visit, clear and direct communication.  If it is a good time, then just have some vodka in the freezer door.  We’ll toast to my friend Cheryl. 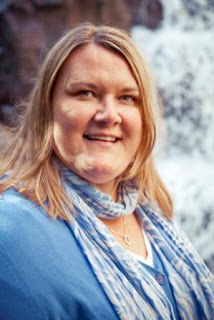 Postscript: Cheryl Jakubik was an organ donor. Her family received notice that her corneas have been successfully transplanted, so now there are two more people with sight! Please consider being an organ donor – if you’re in the US, sign up today at www.organdonor.gov.
Posted by Bren in SoCal at 2/03/2013 10:01:00 PM

I'll go out and get the vodka now. XOXOX
Love, Jen

I've been thinking about Cheryl a lot lately. I woke up this morning thinking about how I wish I could get some advice from my fabulous mentor. Seeing this blog gave me the advice I need. Thanks for sharing your fabulous friend. I only knew her for a couple years but she made a huge impact on my life. I will always remember her advice....

This is so beautifully heartfelt. I think the we had the honor of five months. Looking forward to our next two - anytime my friend. Or maybe we can travel to Asia together. Love you.