"Ambivalence: simultaneous and contradictory attitudes or feelings (as attraction and repulsion) toward an object, person, or action."

I really am ambivalent towards the South.

On the one hand... I really resent them as much as many Southerners may resent me as a tax-and-spend supporting, science loving, civil liberties using, equal protection believing, northern (by birth) gay liberal. I mean, I really agree with everything this polemicist had to say after the 2004 election.

Some of you may have heard me refer to the entire region of the 11 former states of the Confederacy as "The Slave States" or "The Treason States" or in less charitable moments "The Crackah States" or "The Developing World States."

Those Southerners who claim "cultural heritage" as they fly the Stars and Bars would elide the reality that Southern Culture was built on the free labor of million of Africans. Many poorer Southerners who claim the antebellum South as their own have bought the simulacra pedalled by "Gone With the Wind," "Birth of a Nation" and other films, books, and narratives that placed white southerners, regardless of class, as the victims of Northern agression and incipient Black violence. It's simply not true that poor whites were represented by the political institutions in the South at the time of the Civil War, but the twisted pathology of disenfranchisement combined with racism makes some of their disenfranchised descendants - poor whites - look to the Slave Holding South as a golden age of their culture and a time and place in which perhaps they were not so powerless.

The antebellum South was home to a morally repugnant and corrosive political and economic system that had to fall, and it took the death of 360,222 young men from the North to bury it.

In many places in the South, they've not moved on. Along I-40 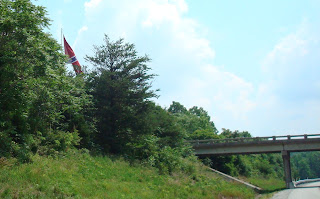 in Eastern Tennessee there is a HUGE Stars and Bars flying just north of the pavement that was built by Liberal Northern men, capital, ideas, political will, and engineering expertise.

Can you just imagine the South without the huge transfer of wealth that we as Northerners or Westerners - as NON-Southerners - have poured into that region? Eastern Tennessee without the TVA? Houston or Huntsville, Alabama, without NASA? Atlanta without the NIH? All that Northern money and expertise and - gasp! - science poured into the poorest, least well educated section of our nation to finish the work of Reconstruction and to form a more perfect Union.

And they resent us, and have held national politics hostage for the past half century as they have resisted school integration, and funding on science research (18 of 37 "No" Senate votes on stem cell research came from the South or border states, the largest concentration by region), and on ridiculous and divisive issues like the attempt to amend the U.S. Constitution to outlaw flag burning. I can't think of more political speech than burning a flag in protest, and they came within one vote of success. Disgusting.

And the racism... let me just mention the racism. I am not going to forgive Milwaukeeans their terrible history of racial predjudice, or Chicago of its deep and continuing polarization along racial lines, but let's be honest - the South has got racism down. The high school in Alabama where the principal threatened to cancel the prom instead of letting an interracial couple attend and the kids, good on 'em, had to sue to proceed, or the town in Mississippi which had its first interracial prom THIS SPRING, are uniquely Southern phenomena. The Georgia woman who disinterred her dead auntie from a cemetary where they started interring Black people is surely a Southern phenomenon. James Byrd and Brandon McClelland. Stone Mountain, Georgia. And all the Confederate hagiography around seemingly every courthouse or town square in the south is disgusting - lionizing people who took up arms against the government (a/k/a "traitors") to preserve slavery seems to me a visceral reminder to their black neighbors that violence to maintain racial status quo is acceptable and likely. I know how I feel when I drive by a church or pass a car on the freeway with a "Yes on 8" sticker; how can African Americans feel living with these symbols of armed treason in support of slavery on the front lawns of courthouses at which they must go for justice? It is repugnant.

(click on the pic and read about the "Tragic surrender at Appomatox" and the effort to "guarantee the security of persons and property," a/k/a slaves. From the courthouse lawn in Washington, Georgia; June 2008. I stood there reading it, stunned.)

All these years later the Civil War isn't over for some in this sector of our nation, despite all of our investments and despite their ability to dominate the national agenda. "The South Will Rise Again" we were told. Well, in some ways it did - from 1968 to 2008. But it's over. Southerners no longer dominate national politics, and while it's early for one election to constitute a trend, the NYTimes ran an article with a fascinating look at the waning national influence of the South, including maps that show voting trends from 2004 to 2008 - nearly all the red on that map is in the 11 states of the Confederacy, Oklahoma and Kentucky; much of the rest were in the home states of the GOP ticket, Arizona and Alaska.

Please, in the name of all that is holy, let that be the case. Please, let the South go back to being the colorful backwater of fattening food, slow paced life, and colorful politicians. Please let the white Southerners who believe in "states rights" (until it comes to Bush v. Gore or decriminalizing marijuana or gay marriage) retire in the face of a new generation who see the need for taxes and infrastructure and e pluribus unum and loving who you love despite color or gender.

Keep this up and you're sure to be labeled by Michelle Malkin, the preeminent social thinker of our times, mind you, as UNHINGED (gasp!). It was a good read and I'm totally with you on performing an amputation of the U.S. south of the Mason-Dixon Line(but we could probably save Maryland, Virginia and North Carolina). Amidst this Prop 8 fiasco, did you happen to see the vote breakdown by demographic? Specifically, I'm talking about something like 70% of blacks supporting Prop 8. Since this is not statistically insignificant, I'm not sure what to make of this. Is there a religious component to this? Is it ignorant or unintentionally racist to make the conclusion that this due to insecurity? One could make the case that this insecurity is not without cause but the resulting animosity is probably misplaced at best. Any thoughts/info? Sorry if this is a sacred cow that I'm slaughtering but I'm at work and bored to tears.