I was the only one in my family who was from Benton County - I was born there and it was the only home I knew until we moved to Lafayette in 1981, when I was 13. My dad would occasionally comment that I was the only one of the ten of us kids who had his baptism and first communion (roughly birth and 2nd grade) in the 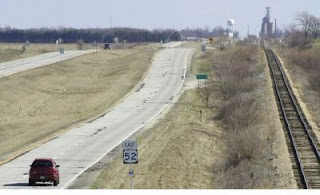 same parish - in this case, Sacred Heart, Fowler. He would say this with an almost wistful air, with the implication that I was lucky, that others had made sacrifices and moved around and I hadn't been asked to do that.

And he was right. I was lucky. I loved Benton County - maybe because it's all I knew and I'd've loved anywhere, but maybe there was something about the gentle landscape and wide open spaces and the seasons that I loved, too.
(Above right - looking south down US 52 towards Fowler from Earl Park.)


My brothers and sisters had a different opinion - and it seemed to be that the older the sibling the less he or she liked it. We little kids got the message early that Benton County was beneath us, that there had been other places that had been better, that it was a back water, a hicksville with bad schools, no culture, no doctor and no dentist. (There was a dentist, but my ma had a fight with him because he wouldn't provide dental care to the migrant farm workers in town, and so we drove to Kentland in the next county, 14 miles away.)


I can see why Dad picked Benton County - and it was just Dad, Mom+9 came later, sight unseen - but it wasn't inevitable. Dad worked in West Lafayette, a considerably larger city, next to Purdue University, in the next county over.

But with nine kids Benton County made more sense economically - for one thing, there were lots of jobs for teenagers in the fields and the canning company across the road, and there was a free Catholic Elementary school, Sacred Heart. Yup, free. Well, it was $30 a year for books, but that was it - no tuition fees. Since my parents were adamant that all ten of us go to Catholic school, no tuition fees saved them, literally, thousands of dollars. Housing costs in Fowler were lower than just about anywhere else (even today, a four bedroom house can go for $50K), and everything else was pretty cheap, too. We had a gas tank out back so we were able to get gas in bulk, and the Co-Op fuel delivery man went to our church, so he'd let things slide when we needed. Which was good, because it was needed not infrequently. We heated our house with fuel oil, and that we got in bulk too. From the Co-op.


I can also see why my older siblings actively hated it - or at least badmouthed it. The relative shortcomings of Benton County are pretty evident. In 1990 and 2000, Benton County was the third least populous in the state of Indiana. The current population density of 22 people / square mile is 2nd lowest of all Indiana counties (the Indiana state mean is 178/sq mile). There's not much there. In 1970, just after we moved there, the population for the whole county was 11,262, It would have been a little livelier, but there was still only one high school and one stop-and-go light, and it usually was flashing red one way and yellow the other.

Compared to the counties my families had lived in previously, Benton County was country. Even Lenawee County, in Michigan, the most rural of all previous locations, had over ten times as many people as Benton County, and my family had lived in a town with nearly 20,000 people, at least eight times Fowler's total. 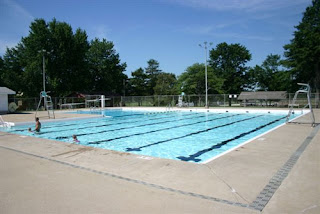 In Benton County, there wasn't much to do, especially for teenagers.

In the summer, there was the Fowler Park pool, at which we could get a "family pass" which gave us unlimited use of the pool all summer long for a flat fee. (They've removed the high dive, which is too bad.)

There was a movie theater, open intermittently during my 13 years in Benton County. It had a great Art Deco facade which, I'll admit, I appreciated not at all as a kid. (They've fixed it up and are showing first run movies there these days. 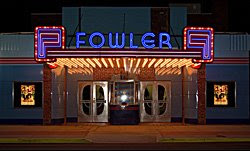 There are a ton of pictures here and a website on the history and restoration efforts of the Fowler by the Prairie Restoration Guild here.)

But to be fair, one movie theater doesn't really make an entertainment district. My older siblings must have been bored stupid, and likely were broke much of the time without the means to get to more exciting places. Me? I was young, and a little odd, and entertained myself by playing in our driveway.

Another huge difference in our Fowler experience - mine and that of my older siblings - was that I was born in Benton County, and grew up with a peer group. I didn't have to make friends, the kids I grew up with had always been my friends. I was accepted. I'd given nothing up to come to Fowler; there was no past in which I had been athletic, popular, smart, well-known - which were all things my siblings had left behind, again, with the move to what was the only town I'd ever known.

But I didn't understand any of this context as a five- or 10- or 12-year old, and I resented how my hometown wasn't as good as others they'd known. (And let's be honest - Adrian, 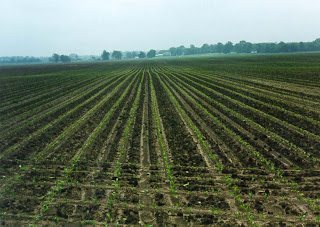 Michigan, might have been nice, but I've driven by the address on my hand-me-down ball glove and it wasn't Paris.)

I resented being shut out of that common experience, too, and not being able to share in the collective family memory. I also knew that part of what was beneath my older siblings was me - I was beneath them. I wasn't "cool" like they were or the way they aspired to be.  I was a local, after all. I really, really liked Jell-o. I said, like my peers, "mayzhure" and "warsh".  I wore, like we all did, all my friends, the same pair of hand-me-down jeans every day for a week.

But perhaps worst of all, there was part of this family mythology - the mythology that we were from someplace better, and thus that we were better than Benton County - seeped in, and I am deeply embarrassed to say part of me believed it.

I found it beautiful, and when we moved into Lafayette when I was 13 I missed it, nearly viscerally. I am deeply nostalgic about the place. Don't misunderstand me - I have no interest in going back to Benton County to live, and you can even read my Urban Dictionary entry for Fowler if you don't believe me (and if you want embarrassing evidence of my condescension too, I'm afraid). But we all have to come from somewhere. And I thought Benton County was beautiful, and it was all I knew and all I needed, and I loved it.

What a beautiful post. I think this is your best post yet.
I keep forgetting what a large family you have. You guys could have had your own reality show.

It's nice to see the memoir that you talked about in Santa Monica a couple years ago--albeit in a form I didn't expect. This is great stuff, B.

You did see that "fowlered" is a verb on Urban Dictionary... you might want to use that in a sentence.

Thanks - I really appreciate the comments for all the posts, but particularly on the memoirs. More to come!

Celeste, the LAST thing my family should have had was a reality show. 1.) we had no TV for many of the Fowler years, and 2.) just... no.

Ken, I'll work on getting fowlered in a future entry. Football season is nigh!

Very well done Steve, an excellent snapshot of those Fowler years. You almost make me wish I'd lived there for all of them.
May I suggest, if you ever choose to do a button pushing piece specifically, you not forget mentioning how a couple of your siblings could return a car home without enough gas in it to back it from the garage to the shed for a refill.

Thanks - I appreciate your thoughts! And I remember that particular button-pushing. That, and when we were all forbidden from listening to WLS, someone set every button the Green Van to "The Big 89!" Not pretty... Funny 35 years later, but at the time?

Stumbled on your post quite by accident trying to do some research about Benton County. Had no idea that there were so many Benton Counties in this country! I lived in Shelby Township, Tippecanoe County while you were in Benton County. I really appreciated/enjoyed your blog.