I think this is going to be a regular feature of Bren's Left Coast - how my car is cursed. Regular readers (and you both know who you are) might remember from Parts 1 of 2 and 2 of 2 (which are now inaccurately labeled, of course), that I've had trouble with Christine from the moment I brought her.

Wellll... I took it in to the Dealership (NO, absolutely NOT the one I bought it from, and everyone should avoid Grenier Pontiac in Poway, California, like the plague - unless that is in fact what you're in the market to buy: a plague) for an oil change, and so they could look at it and see if it has the technology for keyless entry, and so they could reset the "Change Oil Soon" message I was getting on my instrument panel. (I change the oil every 3-4k miles, but the folks at E-Z lube on Genesee in San Diego didn't know how to reset the "oil life" on the ship's on-board computer. Why didn't I look in the owner's manual, you may ask? BECAUSE SHE DIDN'T COME WITH AN OWNER'S MANUAL! When it was stolen - or, in fairness, perhaps when it was recovered, but the salient point is that at some stage - the owner's manual was jacked along with the car.) (And, in fairness, this is absolutely something I should have noticed and remedied with the original dealer, the one that you should never use, Grenier Pontiac in Poway, California.)

The good folks at Pearson Pontiac in Sunnyvale this morning recommended a tire rotation so I thought "Sure, let's do that," and then they showed me where there had been irregular tire wear indicating that the alignment was outta whack. (And what do I know from cars, so that seemed like a reasonable technical term. I went with it. I do know enough to recognize uneven tire wear, however, and this wasn't a subtle example for two year old car with 26,000 miles.) What causes that? Well, funny you should ask - I did - and I was told that "there might be some undercarriage damage, or maybe whoever had it before you drove onto or over something throwing the alignment out."

Everyone who is surprised by this, please raise your hand.

I think when Christine was hanging out in Baja California she mighta just mighta been driven by people (and I don't know why, but I see two joyriders, and let's face it, they very likely were dudes, like an all-male couple on board a boosted four seater Noah's Ark) people who felt the need - the need for speed, yes, most definitely (and hence my need for a new catalytic converter the day after I bought her?) - but also perhaps the need for driving over obstacles instead of driving around them. The person or persons who stole her prolly thought, rightly, that their relationship with her was going to be shorter than, say, what I have planned. So, c'mon, why swerve? They were busy dudes. "Let's drive over that berm!" they mighta shouted to each other. "Life is to be lived, we don't have time to steer around crap in the road/ path/ darkened beach just to keep it in alignment!"

So. I'll be going back to the dealership (and again, NOT back to Grenier Pontiac in Poway, California, I hardly need to mention) for an alignment. "Why didn't you do it today?" C'mon, have you been paying ANY attention? Do you really need to ask? Like everything with Christine, nothing is easy. "My alignment guy is out today or I'd take care of it now."

And the keyless entry? Shockingly, not just a missing remote transmitter key fob; Christine is incapable of being fitted with remote/ keyless entry. Which is super handy since there's no 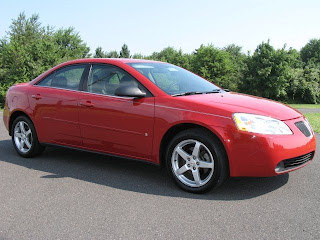 external key lock on the passenger side, and the only way to unlock the passenger's door is to unlock the driver's door and then hit the power unlock button. (On the plus side here, it saves my boyfriend the embarrassment of me unlocking the door for him - I'm from Indiana, I can't help it - but on the minus side when I'm giving my Dad a ride, say, and yes that has happened once, or driving female friends, I have to make them stand there while I open my door first. Manually. And then unlock theirs. It just kinda bugs. And it makes it hard for me to sell anyone on buying a Pontiac, though that ship that was Pontiac has pretty much sailed.) (And how is having on lock on the passenger side, especially without keyless entry automatically built into every car, even a thing? Look at the pics - it's not just my G6, there's no keyhole on the passenger side of this one, either. I mean... who sat in on that meeting and said "Hey, we

could save 37.5 cents on each G6 if we don't put a lock in on the passenger side! They'll have keyless entry, who needs it?" If only he or she were also in the meeting where they said "Hey, I know! We can save 48.pi cents a unit on the G6 if we don't outfit all of them with the capacity to have keyless entry!" Just because only one former Hoosier loves him some Pontiac, is that a reason to cut corners like this? It's a beautiful car design - now outfit it!)

Maybe when I go back for that alignment I'll look around the lot, just to see. 0% financing on another Pontiac G6, maybe one with cruise, remote entry, a cooler radio, and an owner's manual? I could be persuaded.
Posted by Bren in SoCal at 7/20/2009 11:57:00 AM

I'm completely torn between wanting to chastise you for even THINKING of buying another Pontiac (yes, I read post 1 of "2", but still!) and wanting you to buy another Pontiac because they make for good posts. :-)

PS: Totally offended that my word verification is "strom" as in "Thurmond." I'd like some wh1te supremacy with my coffee, please.

1. To clarify--the dealership sold you that car as new even though it had been stolen? I read part two but am unclear on this point.

2. I am picturing the joyriding scene from Ferris Bueller. tee-hee.

3. How could you even >think< of buying another Pontiac?! You are my parents. They drove a Chevy Caprice (whose main recommendation was not their own thorough research, but rather that it was the car the provincial police used, so therefore it must be good >eyeroll<.) One day after my mom had driven it to work, and parked it, it spontaneously burst into flames. What kind of car did they buy to replace it? That's right. Another Chevy Caprice. When I berated them for doing so, my mom said, "Well it was a wonderful car before it caught on fire." Uh-huh. Have I made my point? :)