There was a small plaque up in the den in the Fowler house – and if you're picturing "The Den" as looking like the room in which Mr. Brady worked, or where Bob Newhart wrote his how-to books in the Inn in Vermont, well... the Den in the house in Fowler was different. It was a brightly lit, worn-linoleum-covered room on the southeast corner of our house. It had windows along the east and south sides, an arch into the living room on the north side and a squared – as much as anything was truly squared in that settled farmhouse – entrance into the dining room on the west side.

It also had the front door to the house, at the top of five concrete steps leading down to the pitching sidewalk which led out to the gravel driveway. It was a balky old wooden door that was simultaneously hard to open and completely ineffectual at keeping out winter drafts, so once it was shut up in the winter it was seldom used except for first time guests, Father Froehlich, and our District Manager from the Journal and Courier paper route. In warmer months we'd use it on our way out to the bus in the morning as it was closest to the road and we could see the bus crest the hill from there, but we didn't often use it to come in - afternoons, we'd troop past the flag pole, past the faded statue of Mary in her small but well tended grotto, past the bikes sitting out in the side yard, and past the tire swing - and enter through the back door, where we'd kick off our shoes.

The den housed both the toy cabinet and the gun cabinet. The glass-faced gun cabinet was in the southwest corner of the room, behind the door, and it always contained at least five long-barrel guns including a .22, a .410, and a rifle with a scope. After my brother returned from the service it also contained a Colt .45, but the way that gun was talked about and handled was very different. Shotguns were guns, but the handgun was different, and possibly sinister, and definitely locked away in the bottom drawer, with the ammunition. The upper part of the gun cabinet was locked too, of course, but since the key was IN the lock at all times so as not to be lost, and as the house itself was never locked, you couldn’t really say that this was highly effective security.

The gun cabinet was to the left behind the door as you entered and the toy cabinet was to the right, in front of all of those windows. It really was a shelf unit, a converted bookcase, about three foot high, two foot deep and four foot long, homemade of plywood with one lateral shelf about halfway up and painted light blue. Like most kids, I'd guess, I thought it was fantastic. It’s where I kept my barn and the plastic model animals, and the fences that I'd set up to keep them penned. The Silly Putty and the Play-doh, when there was any to be had (usually shortly after Christmas), were there (when they were put away), and also, later, my tub of BrixBlox (Sears' answer to Legos) and two big 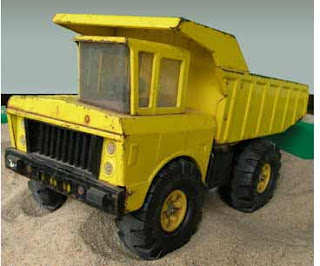 yellow Tonka trucks which were pressed into duty when I would play in the driveway.

On top of the toy cabinet was a round goldfish bowl, which you probably are picturing correctly if you’ve ever seen a fishbowl in the comics. If it were close enough after the Benton County Fair for the goldfish that was inevitably won to still be alive, then it would be a goldfish bowl with a goldfish; otherwise, it was housing for any vaguely water-based animal unfortunate enough to have been caught. Baby rabbits whose moms got run over by the mower went into a box with rags and were fed with an eyedropper of milk, but tadpoles from the Fowler pond and crawdads from Schwartz’s creek inevitably went into the fish tank, and were largely forgotten. (And, sadly but unsurprisingly, the fish tank was often their last residence - all died shortly after being moved in. It was on the top shelf of a southeast facing room that got lots of sunshine, so in the summer months when they were likely to be caught, vaguely water-based animals didn't stand too much of a chance.)

To the left of the toy cabinet in the corner there was a wooden rocker – just wood, no cushion – which was said to have belonged formerly to one of my grandparents and which was displaced for the Christmas Tree on the 24th of December. The goldfish bowl was put someplace else during Advent as well, since by then it wouldn't have housed anything living anyway, and that was where the cardboard Advent Calendar was placed. Opening one door at a time for each day that passed, revealing a different scene in the tiny window behind it in the story of Jesus’ arrival, was very effective at building anticipation for Christmas. The calendar didn't change from year to year, and by the time I came along it had tape on top of tape, and I was well enough versed in Christian mythology to remember from year to year which window had The Visitation, for example, so it wasn't suspenseful in that regard, but it was one of my childhood's rituals that marked the passage of time.

The den also had the desk of the house, which, looking back, probably earned the room its label. And which probably should have occurred to me before now, but as a kid it was just "the den" in the way that it was just Fowler or just Sacred Heart Church; the power of naming being opaque and bestowing that degree of inevitability. There was a ridiculously heavy old Royal typewriter for older sibling on the desk which I was not allowed to use. It sometimes had a black-and-red ribbon in it vs. just black, which I thought was especially cool. I would try to surreptitiously type on it, playing with the red and black settings, but I would always get quickly caught - it was a manual typewriter sitting on an oak desk on a linoleum floor in a room with plaster walls, so no surprise there.

The desk was a beautiful old oak desk, with shelves on either side, a foot board that ran the length of it that I could first reach in 5th grade, and a drawer that pulled out in front holding, inexplicably, a small red box with “Dennison” written on the cover diagonally in cursive on one side and three circles, like Cheerios, of white on the other. Inside the box were adhesive hole reinforcers. They were small circles of white paper with the equivalent of envelope glue on one side. When I was a kid I was mystified by these Cheerios, but eventually I learned that if you made a mess out of three-hole punching something, you could lick one of these babies, slap it over the hole, and you were all set. Some bored sibling had licked three of them and placed them exactly over the three circles that ran diagonally across the bottom of that box, and then that same or another sibling tried to circle the three adhesive hole reinforcers with a ball point pen and had failed, so that one tangent of pen line went off to the side, which I remember, even then, bugging me. That box was in the top desk drawer, always, even after we moved into Lafayette when I was thirteen. And I never thought it odd, from before I knew what it contained until after I found the box in its accustomed place when I was home on break from college and I was scrounging for an envelope. We never, as far as I knew, had a three-hole punch or a single-hole punch, and I can’t imagine what we would have done with one if we had it.

In the top desk drawer of the desk in the den was one of my favorite things in the Fowler house: a ruler. It was from my Grandpa M-- (and grandparents were simply grandma + surname and grandpa + surname, done, no nicknames) and it had inset across its face squares of different wood species, from light to dark, from pine to walnut, labeled to help the user identify them. I memorized it in the hopes of being able to recognize the wood of a piece of furniture and say it correctly, out loud, in the presence of one of my six older brothers, my parents, or my grandpa M--. It wasn't the kind of thing I was thought to have known. I loved that ruler and those beautiful wood grains; I thought it was the second most beautiful item in the house.

That desk felt majestic, almost regal, and when I would sit at that desk in the den as a kid, with the dining room to my left and the gun cabinet over the left shoulder and the toy cabinet over the right, even with my feet not touching the foot board, I felt very grown up. I would read the dictionary there, and write letters to my siblings who were away, and haul up encyclopedia volumes so I could flip back and forth between the beautiful topographical map and the no-nonsense political map of whatever state or country I was reading about, and quiz myself on flags and principal industries and largest cities. I didn't read fiction at the desk, it was a serious place for serious endeavours.

And as I'd sit there I'd often look up to my left, in the corner, above where the dictionary and thesaurus stood, and up almost to the ceiling, from my point of view, there were two rounded shelves snugged into the corner. The top one was empty, as I remember, but on the second one there was a thin rectangular wooden plaque – pine – with a perfectly fit rectangular piece of aged paper mounted on it with three words written in brown ink and in all capitals: “I AM THIRD.” I learned to read when I was very young, thanks to my sister who read to me incessantly, so I could read it for long time before I asked what it meant. “God is first, your neighbor is second, and 'I am third,'” I was told, when I asked. I wished I hadn't. I was terrified. Already I was 10th, and now I was third, too?

I didn't often think about it, and I never intentionally looked at it, but sometimes when I'd be sitting on the floor in my favorite hat, playing with my train set - maple - or sitting at the desk, swinging my feet, thinking of a word, it would catch my eye, and I would quickly look away, aware that I'd been caught not thinking about God first again.
Posted by Bren in SoCal at 11/08/2009 08:32:00 PM