One July morning in 1987, I was seated at a kitchen table in Niedersachsen, Germany, listening to rapid Plattdeutsch.

I was used to not understanding speech in the house, or only snippets, as I was staying with a German host family and my one summer of German was wholly inadequate to the task, but there was something urgent being discussed.

My very kind host father with the ready smile went into his office and emerged with four plain white envelopes, his smile strained. His wife eased from my bulging bag the lunch they had packed me, took out the hard boiled eggs she had kindly prepared for me that morning, unwrapped them from the morning's newspaper, and handed them to her husband who re-wrapped them in the plain white envelopes.

They saw me looking at them, and in response to what must have been a quizzical expression Frau H. said simply. "Morgenzeitung (morning paper). You go Berlin. Verboten." And she shook her head.

I was stunned. I was leaving that day for Berlin, the first stop on my solo, eight day train trek, and I of course had to go through East Germany to get there. I would see East German soldiers. I would be in a communist country. There was no freedom of the press, and thus the morning Oldenburg newspaper was contraband. I sat up and started to pay closer attention, and to think about what I was doing - what had been a lark was now serious; what I had learned about totalitarianism through books and news media an ocean away I was now going to see through the glass of a train window, up close and personal.

My host father had business in Hanover that day, or so he said - I suspect it was drummed up so he could point me in the right direction and make sure my ticket was all sorted - and he rode with me and we spoke, as much as we could, about politics and weather and crops and history, and I was very glad for his company. My mind was reeling, though, and I wasn't real focused. What else was contraband? I was a very religious adolescent but I didn't carry a Bible or prayer book or even a rosary, so I was okay there. My journal? I wrote a ton, and scribbling in English could be anything to an East German guard. What about cash? I had deutschmark and dollars, but barely enough for my own purposes, not enough to foment revolution. But how much was too much?

I bid "tschuss" to Herr H. in Hanover and boarded my train east. I saw on the timetable that this particular train started in Paris and ended in Warsaw, which I felt bound it, and me, to history. Just east of Braunschweig we slowed to a crawl as we crossed the border into East Germany through barbed wire, yards of precisely groomed sand and open space, and square towers three stories tall with 360' of reflective glass on top. (When years later I read about a panopticon, I recalled those towers.)

I stared so hard my eyes hurt for the next few hours, watching the grey countryside, the unknown car makes, the small fields, the belching industrial megaliths and the occasional pock-marked building - pock marked by gunfire from WWII 42 years earlier, I realized with a shock - roll by. I looked in particular for people but saw very few, and certainly none very close to the tracks. In Magdeburg, East German soldiers boarded the stopped train and three went to each compartment, checking passports, while others stood at arms, backs to the train, coiled muscle and nerve.

I had my new passport at the ready, and after what seemed like 10 minutes of staring at my one entrance stamp, the soldier handed it back to me, unsmiling, and moved to the next car. No one searched my bag. I wasn't going to be pulled off the train and into a small room and asked questions. But everything radiated control, and a lack of liberty, of movement, of behavior, of speech.

It was a lesson in liberty; the liberties that I had - liberties I scarcely understood and had taken completely for granted, at 18 - and those that others, even in Europe, did not.

When I got to West Berlin I checked in to my hostel and immediately went to the Wall. It ran through neighborhoods and was copiously graffitied, colorful, ugly, and omnipresent like a whine in your ear that you can't quite shut out: less or more intrusive, but always there. I developed an entirely unoriginal theory during my two days in Berlin: Berliners were all a little bit mad. More than anyone else in the world in those Cold War days, they lived in the mouth of a gun; their tomorrow might never come, so why not eat, drink and be merry?

I watched West Berliners in the parks and neighborhoods that abut the Wall ignore it, uniformly, and literally turn their backs to it. When I crossed into East Berlin at Checkpoint Charlie, I walked from a color film into one that was black and white. Buildings were pocked by Nazi and Soviet bullets from 45 years earlier and nothing was new or colorful. After the anarchy and madness and vibrancy of West Berlin, it was disorienting. I walked miles around the city, getting as close to the wall as I could in residential neighborhoods, and here in the East it was just ugly: monochromatic, menacing, ugly. I saw it for what it was - not as a symbol of the Cold War, not as metaphor, but as an instrument of state power, and state control. If I ran towards it, I could get arrested. If I tried to climb it, I would get shot. 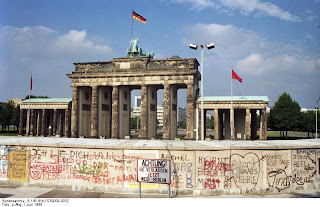 The grandeur of the Brandenburg Gate, with its fascistic fronting lines and spaces, the better through which to see, with its adorning statue's back to Bonn, Europe, and the West, and face to the east, to Poland and Moscow.

Two years after that trip, when the Berlin Wall fell and totalitarian regimes across Eastern Europe collapsed, and I saw people my age dancing on the ruins of it, I knew I was witnessing history. I couldn't get enough of the shots on the news: East Berlin, and then Prague and Warsaw and Budapest and Bratislava and Sofia and Bucharest, became free. Totalitarian regimes collapsed. Fascism, under whatever name it took, was faltering. Millions of people across Eastern Europe could read whatever the hell they wanted, and go where they wanted. If people in Magdeburg now wanted to board a train, they would no longer be shot.

Many people have been making comparisons this week between Cairo, 2011, and Berlin, 1989; or speculating how far the comparisons should go. I was reminded of seeing what liberty was and wasn't. How what a state said - East Berlin was capital of the Deutsche Democratische Republik, after all - and what it did could be so blatantly at odds. How the will of the governed could be subverted by force, overt and opaque.

Watching the events in Tunis and Cairo come to their joyous conclusions, I was thrilled again. I have no ties to Egypt like I had to a sundered Germany, no ethnic bonds or study, and the tyranny under which Egyptians lived was perhaps not the same as that of the East Germans in 1987, but the truth of the matter speaks in eloquence beyond words. I was deeply moved as courageous people came together in Tahrir Square and demanded their liberty. There are not too many times in human history when the world has seen such a thing, and I've seen it twice now.

It's a long road ahead for the Egyptians and Tunisians and Iranians and Bahrainis (and, and, and...) And while the Belarussians might have some thoughts on that, so do the Poles, and the Latvians, and the Czechs. More liberty is better, more people living under more liberty is better.
I am proud to have been reminded of the freedoms I have by the people in Cairo. I'd love to learn the lesson again from Tripoli or Tehran.
.
Posted by Bren in SoCal at 2/18/2011 05:29:00 PM