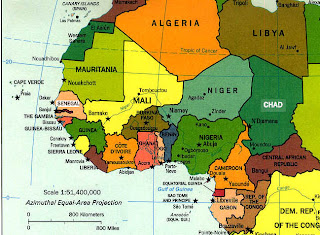 Yes, across the northern rim of Africa there is unprecedented news and activity this week, but in western Africa there is news, too, and an opportunity for the United States.

In Côte d'Ivoire, a strongman was voted out of office and he's not leaving. Laurent Gbagbo, the losing president in question, is clinging to power despite calls from his neighbors in the region to step down, despite offers of asylum in other west African nations, despite (nearly - keep reading) no one believing any of his manufactured claims about legitimacy, or getting the most votes, or needing to stay for law and order.

The most recent development, as reported in Le Monde this morning Paris time (article in French), is that M. Gbagbo has seized two French banks and frozen their assets in order to have the funds needed to pay the military and police on whom his support is based.

No money to pay the soldiers, no more régime for M. Gbagbo. And what is paying his soldiers to do? Murder people who voted for his rival, M. Alassane Ouattara. Ouattara happens to be from the northern part of the country, and is, like most people in the north, Muslim. Many of Ouattara's voters (though by no means all) are Muslim. The people turning up dead in morgues and in mass graves around the country? Muslim. M. Gbagbo's religion? He is reported to be "a devout Evangelical Christian." (And Pat Robertson's CBN has come out in support of him. No, I'm not kidding. Original CBN interview here.)
If you have a strong stomach, you can read what the good Christian has ordered his thugs to do in an article I first read in the Chronicle.
Why this religious regional division? It is a legacy of colonialism. When the Europeans left western Africa, they left nations whose borders were drawn by bureaucrats in London and Paris to facilitate maximum economic exploitation of the region with no regard to local tribal alignments, languages or religions. They make no sense. If you were to draw a line on the map roughly from Freetown, Sierra Leone, on the west to, well, the Nile River, really, you'd have largely Muslims to the north, and largely non-Muslims (Christians, animists) to the south. This line nearly bisects Nigeria, Central African Republic, Benin, Togo, Ghana and yes, Côte d'Ivoire. Add this careless border drawing and the resulting competition of regions, religions and clans for resources and power within nation states to the bloody ills to the European legacy of intrusion into Africa.

So, where is the opportunity for the US here?

Our stated ideals - in this case, democracy and the legal transition of power - absolutely benefit Muslims and all Ivoirians, and would be an example for us to point to where we are actually doing what we said we would. It would also be in our strategic interests - tertiary, fine, but still -for a stable democratic state to develop along Ghana's western border, where Mr. Obama visited not long ago. If the state were not a strong man ruled cleptocracy and were at all reasonably governed, the standard of living would increase, and perhaps Ghana and Côte d'Ivoire could be regional incubators for stability, prosperity and democracy.
Applying significant diplomatic pressure to ease out M. Mbagbo and allow M. Ouattara to assume his rightful role as president is a low risk, moderate reward move for the Obama administration.
Take a look at the headlines, and then a map. They - and we - could use one about now.
.
Posted by Bren in SoCal at 2/17/2011 09:40:00 PM

the AU make the EU look steely-reserved; toothless and feckless. I know Ms. Clinton has a lot on her plate, but this is an easy win for the US.