We checked into our home for the next month, a hotel on Green Road (left) in Dhaka’s older downtown area, strategized for the workshop, and decided to get settled in and then meet up for dinner after a bit. 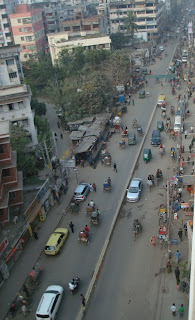 I'm so relating to your experience right now. My 4 months in China incited so many of the same feelings, emotions....even the smells and sounds! I love reading this--thanks for sharing!