The plane banked over Spain for the final approach and there was Lisbon - like me, just waking up - near the mouth of the River Tagus. And “mouth” is exactly what the topography looks like: upper and lower jaws slightly parted where the Tagus flows into the Atlantic. Lisbon is the site of an old port where for centuries Portuguese princes, captains and sailors embarked for voyages of exploration and conquest. 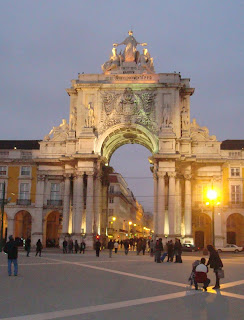 Like former imperial capitals Paris or Berlin, Lisbon presided over a vast territory for vast stretches of time – China to Africa, Brazil to the North Atlantic, from 1488 to 1999. More people speak Portuguese worldwide than Russian, Japanese or French. The technological advances in navigation developed here spurred the Age of Exploration, and led directly to Columbus and other Europeans circling the globe. This imperial legacy shows – you can’t gaze up at the statue of King José I in the grandiose “Praça do Comércio” (right) or down the long, ordered lines of the Praça Marques de Pombal to the riverfront without feeling the grandeur.

Unlike Paris or Berlin, however, Lisbon and the Portuguese seem to have settled comfortably into a post-imperial life. Its charms are not primarily tied to its proud past, they are found in its agreeable present of good food, great music, and a European quality of life.

I took a bus to my hotel in the Saldanha neighborhood, a trip which should only have taken 15 minutes that took 20 because I missed my stop - I just couldn’t believe any international airport was so reasonably close to the city center.  Walking through the commuters and observing the morning rush, I was immediately and irrevocably charmed. The architecture! The fountains! The non-rush rush hour! The agreeable pace of life!

I knew little about Lisbon and had done next to no research. I was there on a whim - thanks to a break-up and a United Airlines fare sale - and had only got the flight two weeks in advance; I really hadn’t planned out an itinerary. That's how I like to see new places, in any event: a fly-by-the-seat-of-my-pants approach that I’m sure means I miss some gems but I'm equally sure yields unexpected delights. And it suits me. I’m not an ambitious traveler. I remember conversations more than monuments, and atmosphere more than museums, and this pace and style perfectly suits Lisbon. I walked and took trams – slow, rattling, unautomated trams – everywhere through the old city.

My room at the penzion wasn’t ready yet, since it was only 9:30, so I stepped into the Hotel Ibis Lisboa Saldanha for a coffee and ended up having a full breakfast of eggs, toast, yogurt, coffee and juice for €6.50, thus discovering yet another of Lisbon’s charms: it’s affordable. A hotel breakfast in most European capitals would have been far less tasty and far more expensive.  (Consider the hotel for lodging; it was immaculate, the staff was friendly and helpful though I clearly wasn’t a guest, it is in a quiet neighborhood, and it has published rates beginning at €69/night.)

Despite my lack of planning, the trusty Lonely Planet Portugal guide that I’d bought just before boarding in Newark had great suggestions, the first of which was the Lisboa Card, a €32 investment at the airport welcome center good for 72 hours’ free travel on all metro subways, busses, trams, and funiculars. The Lisboa Card also entitled me to discounts – some up to 100% - at many museums, and mine more than paid for itself. On the flight I’d roughed out three key things to do: day one, walk the city streets and climb up the hill to the Castle of Saint George, in the oldest district in the city; day two, take the train to Belem to see the Manueline architecture of the Monasterio de los Jerónimos; and day three to wander the city on foot and by tram, and to take in its Plazas, restaurants and nightlife.

After a quick nap I headed out, avoiding the closest subway station to walk above ground to see something of the city. Good decision. Lisboetas, on the Friday that I was there, were in no hurry as they played chess or backgammon in the sidewalk cafes. The irregularly shaped, ancient 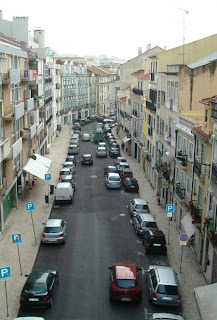 blocks result in irregularly shaped, ancient buildings, at almost every corner. As I walked through the working class neighborhood near the Arroios station (and if that name looks familiar, it’s because the district is built in and above a deep arroyo - pictured left), nearly every block yielded some charming, architecturally improbable sight, in green and orange and pink that seemed just perfect in the soft January light.

My wandering through the Baixa district and up (up!) the Castelo district got me to the Castelo de São Jorge a few hours before its closing. I had enough time for the serious business of the day, looking through the impressive museums on site showing the twenty eight centuries of human history. Looking at a coin from 600 BCE, I couldn’t help but wonder. Who had minted it? What long dead hands had held it? What did it buy? How did it end up buried under castle walls, to be found centuries later? I exited the museum at the perfect time to climb back up to the walls and look west, for stunning views of the sun setting into the Atlantic, far in the distance, beyond the estuary and the city and the river’s mouth.

It was serenely beautiful: the city, with its plazas, six hills, and river, laid out below me. Time slowed, then stopped. I gazed from the river out toward the Atlantic and the horizon, imagining the Phoenician sailors on the Tejo 3000 years before; and the Arabs, who built the walls I was sitting on and who first arrived in 1300 years ago. I looked away from the horizon, closer, first to the other hills and churches, then, just below me, to a house not 30 feet away, where I watched a dog walking in lazy, mildly inquisitive circles in a back garden, under a clothesline, under 900-year-old walls. 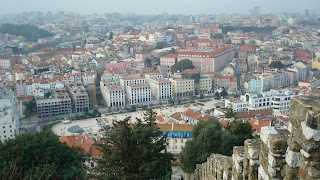 It seemed perfect. Men had hewn these massive blocks of cooling stone, and had fought bloody battles around them, and the walls and the turrets with the Portuguese flag flying above them were testament to centuries of history and effort and toil. And yet here was a dog and clean clothes and a beautiful sunset. How many dogs had there been, in the those 900 years, under those ramparts? How many loads of laundry had someone washed and hung out? Who had sat before me, looking west at the sunset?

The compression of time – of eras and centuries – seemed profound. I sat there and took it in.

But time, however compressed, doesn’t stop, so when it was politely indicated to me that the Castle was closing, I walked out through the gate, down the hill, and back into time.

I had heard that Lisbon goes out late so I took a nap and returned to the lobby at 10:30. “Too early,” the desk clerk said, and told me to go get a coffee and dinner, and not to hit the clubs for another hour at the earliest. I wandered through Bairro Alto, just waking up and soon to have people of all persuasions with drinks spilling into the streets. Temporarily and pleasantly lost, I stopped into a tiny corner restaurant across the street from one gay bar and down the block from another, none of which could I find again, unfortunately. I was the only diner - "too early!" - and the two matronly proprietors plied me with rum and port, brought out samples of “real Portuguese cooking” from their mothers’ recipes, and dusted off the English they’d learned to go to Oxford forty years earlier. This was quintessentially Lisbon, I decided – wander in, find more than meets the eye, and be made to feel perfectly at home. As I finished some dinner and drinks and post cards and port and, well sated, prepared to go, I was given a grossly inadequate bill, I grossly over-tipped, and saying out goodbyes they thrust a map of Lisbon’s gayborhood in my hands and bade me well.

I didn’t have an issue with jetlag because I essentially stayed on Lisbon time – dancing ‘til 4 am, sleeping ‘til noon, exploring more of the city on my Lisboa transit card, napping, dining, repeating.

I made it out to Belém, saw the fanciful architecture of the UNESCO sites, and was 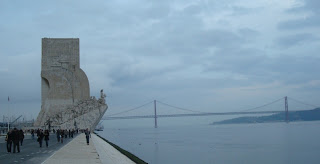 moved by the Padrão dos Descobrimentos (Monument to the Discoveries, left) statue as I watched modern Maersk container ships motor by on a route to China first made possible by the caravels that had sailed 500 years before. As recommended by every guidebook, with good reason, I took Tram 28 from end to end. I met friendly, tolerant, stunningly attractive people, Lisboetas whether by birth or via Angola or Brazil or the Portuguese countryside, at every meal and at every club. And I was completely ruined for any future trip to any other European city.

How could they compare?

Some have better food, some have better museums, some have better entertainment, perhaps. But what do you want out of life? What’s your rush? Do you really need to collect the greatest hits of European travel? Slow down. Savor the moment. Lisbon doesn’t sweat the small stuff – it’s seen it all, and learned a thing or two about ambition and what that yields. It is perfectly happy to do a load of laundry, hang it out to dry, and sit in the back garden with a good meal and a happy dog and watch the sun set behind the hills and the river and the west.

Since it was January and I was still in a New Year’s resolution frame of mind, I made one of my own: in the new year, I vowed to be more Portuguese.