In praise of Big Government


Any dropped calls lately? Any text come through 24 hours - or later - after it was sent? Any phantom charges on your phone bill, or credit card statements?

How are your bank fees? Happy with your bank overall?

Travelled by air lately? How was that?

And your employer, if you work in the private sector - they never do anything stupid, do they? They are remarkably well-run models of efficiency, are they, always making good decisions?

So why have we as a nation fetishized private enterprise and vilified government run endeavors? How has this happened?

I have had it with people saying that big government is the problem. How so, exactly? What's the problem? They drive interstates, they turn on taps in their homes and drink the water, they fly planes that are checked for safety by a government that built the airports from which they're flying, they have police to look after their property and enough social welfare to ensure that we all get along, for the most part, and yet government is the problem?

I've heard things like "Government isn't good at running things" from people who like to talk about our military as one of this nation's greatest assets.

I've heard "government can't do anything right - look at the Post Office, it's losing money!" Well, true, but of COURSE they are! One November on a recruiting trip in Guam, I mailed all my holiday cards. I remember so clearly going into the main Post Office in Hagatna and handing over a stack of envelopes, and marvelling that they would all get to where they were supposed to go for such a small fee. (And I have never had a piece of mail misdirected or lost.) So who else is going to run something that will charge me 42 cents to put a sticker of Bart Simpson on the corner of a piece of paper and ship it from San Francisco to L.A., or New York; or Milwaukee; or Fowler, Indiana? Isn't that a good thing, that there's someone willing to send a letter from anywhere that's under a U.S. flag to anywhere else that's under a U.S. flag? Isn't that part of the common good? Isn't it freakin' remarkable, when you think about it? 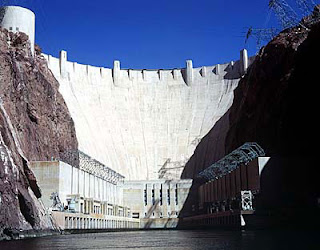 Am I the only one who remembers that the Hoover Dam and the Space Shuttle were built by Big Government?!

The 20th Century has been called by some the American Century. I can see why - we were pretty dominant on the world stage. We had unprecedented wealth, we spread it to an unprecedentedly broad group, we led unprecedented growth, innovation, creativity, peace and prosperity.

Name the greatest achievements of the United States of the last century.

Would defeating fascism in World War II make the list?
How about putting a person on the moon?
Discovering and harnessing atomic energy?
Eliminating endemic poverty among elderly people?
Founding and funding the best university system in the world?
Getting closer to fulfilling the promise of full participation by all in civil society?
The Marshall Plan?

This is why I'm a liberal - most of the unprecedented achievements wrought by the effort and ingenuity of Americans over the past 100 years have been led by liberal governments.

The "intent of the founders" that our countrymen and women in the Traitor States keep yammering about? Does this sound familiar?

"We the people of the United States, in order to form a more perfect union, establish justice, insure domestic tranquility, provide for the common defense, promote the general welfare, and secure the blessings of liberty to ourselves and our posterity, do ordain and establish this Constitution for the United States of America."

How is any of that done without government, and Big Government?

Since Hoover, Republicans have been the party of cowardice in foreign affairs, the party of racism in domestic affairs, and the party of temerity at first and latterly hostility to science and technology.

Lend Lease, to keep Britain in the war long enough to overcome the resistance and fear of myopic Republicans in Congress? Franklin Delano Roosevelt

The G.I. Bill? In fairness it was co-sponsored by a Republican, but it was passed under a Democratic Congress and signed by a Democratic president.

What has lead to prosperity in this country - the more perfect union that our founders explicitly strove for - is government ensuring that there is enough fairness, justice and opportunity that we can live in neighborhoods without walls, that we can achieve our dreams, that we can work hard and move up and keep the fruits of our labor.

What does private capital do? It engorges itself. Left to its own devices, private enterprise will absolutely destroy itself - we've seen that, this year, in the finance sector. Private enterprise needs government - big government, government with enough authority, budget, capacity and oversight - to ensure transparency, fair play and confidence.

Government has run large, complex projects - stunningly well, in some cases (and you're welcome, ingrates who didn't send one electoral vote to a democrat, for the TVA, electricity and Federal talent and money to wrench you into the 2oth century) - and it will do so again. To suggest that it can't or hasn't or doesn't, every day, is to forget our proud national history and some of our greatest national achievements.

And it diminishes our future.

We are a richer, better, more equitable nation due to large government, and we surrender that progress and that unique legacy when we turn over our nation to private enterprise. Think of that the next time a call drops, or you're inexplicably delayed at an airport on a sunny day.

Think of that the next time you turn on your tap.

Science in the News

I love the smell of hypocrisy in the morning.

"I made a mistake and I sincerely apologize," the statement said. "I deeply regret the comments I made in what I believed to be a private conversation. This is a private matter and I ask that everyone respect the privacy of all involved."

Thus spaketh the California State Assemblyman Mike Duvall, Republican (natch) from Orange County (natch!). Well, you know what? When you are on a break from a legislative hearing IN THE CAPITOL it's not a private matter.

When you are talking about having sex with two LOBBYISTS, one of whom represents a firm (Sempra) with business BEFORE YOUR COMMITTEE it's not a private matter.

And lastly, when you decadent, corrupt, mean spirited, two faced, cheating, lying, hypocritical, malfeasance-practicing vermin make my personal life a public matter through your "Defense of the Family" propaganda? Yeah. It's DEFINITELY not a private matter.

As legislator, Duvall has "blasted" efforts to promote gay marriage. The conservative Capitol Resource Institute gave him a 100% rating, calling him "a consistent trooper for the conservative causes" who "voted time and time again to protect and preserve family values in California".[8]

A ton more from the good folks at the Sacramento Bee here, and if you have a strong stomach there's more here (though this has his actual comments, and they are DEFINITELY not safe for work).

Duvall joined other Republicans in voting several times this year against renewable energy measures opposed by Sempra Energy. The measures would require utilities to derive significantly more electricity from solar, wind, geothermal and other renewable energy sources by 2020.