I can't imagine that I'm the only one that took Obama's reference to Churchill's decision not to torture during World War II and laid it side-by-side with Cheney's recent statements and comportment over the last decade or so... or week or so. More than ever it shows how poor our political leadership was in the aftermath of the tragedy of 9-11. Instead of men and women with the confidence of their convictions we had Bush and Cheney; instead of lions, we had mice.

During the Battle of Britain, there was a real fear, both in London and Washington, DC, of a Nazi invasion of the UK. The point of the Battle was for Germany to control British air space so they could launch an invasion from France across the Channel. There was legitimate concern about Britain's very existence as a sovereign nation. Russia was not yet in the War. The United States, while sympathetic, was not yet in the war. Britain was alone. The Nazis had conquered all of Western Europe in six months, destroying the largest land army on the continent, the French, in six weeks, and they had a two to one superiority in planes. They were on the attack, had the momentum, had statistical superiority, and were fighting over British, not German, airspace. The British people were nightly being terrorized by whistling bombs and were sleeping in Tube tunnels.

From August 23rd to September 6th, the Luftwaffe started night time bombing raids on cities. The RAF was also badly hit with 6 out of 7 main fighter bases in south-eastern England being put out of action.
http://www.historylearningsite.co.uk/battleofbritain.htm

There were Nazi sympathizers in all levels of British society, up to the royal family. The southeastern quarter of the nation was being hit, nightly, by German air attacks. 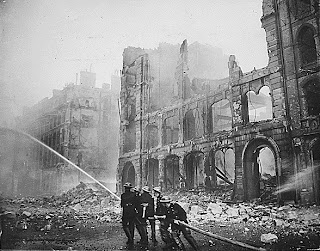 Plymouth, London and Coventry were all destroyed.

In custody in the UK in the Fall of 1940, while all of this was happening, were Nazi prisoners of war. Churchill was unequivocal - despite the grave threat to the very existence of his nation, he would not authorize barbarism, surrender the principles at the heart of British society, or yield to fear and expediency - the Prime Minister did not torture.

As devastating as those attacks were, and as confusing as the aftermath, compare the two. We had leaders who were scared, who yielded with cowardice to their basest instincts, who lied to us, and who gave the attackers a far greater perverse achievement than they could otherwise have claimed. We yielded part of our national identity to a small - disciplined, resolute and well organized, yes, but small - group of infantilist religious zealots. They murdered 3,000 of my countrymen and women. The person pulling the strings has thus far escaped justice. And my national leaders gave up, gave in, caved, and betrayed their sacred duty to those murdered, to the Constitution, and to me and every other citizen of my nation. And for what? For craven tangential political aims and short term political advantage.

Instead of "Blood, toil, tears and sweat" we showed cowardice. Instead of Churchill's words:

You ask, what is our aim? I can answer in one word. It is victory. Victory at all costs - Victory in spite of all terrors - Victory, however long and hard the road may be, for without victory there is no survival.

I take up my task in buoyancy and hope. I feel sure that our cause will not be suffered to fail among men. I feel entitled at this juncture, at this time, to claim the aid of all and to say, "Come then, let us go forward together with our united strength."
http://www.historyplace.com/speeches/churchill.htm

By aiding and abetting murder, the Taliban regime is committing murder. And tonight the United States of America makes the following demands on the Taliban:

-- Deliver to United States authorities all of the leaders of Al Qaeda who hide in your land.

-- Release all foreign nationals, including American citizens you have unjustly imprisoned.

-- Protect foreign journalists, diplomats and aid workers in your country.

-- Close immediately and permanently every terrorist training camp in Afghanistan. And hand over every terrorist and every person and their support structure to appropriate authorities.

-- Give the United States full access to terrorist training camps, so we can make sure they are no longer operating.

These demands are not open to negotiation or discussion.
http://archives.cnn.com/2001/US/09/20/gen.bush.transcript/

Fine words. No action. They are still training and are threatening the stability of an ostensible ally, and one with nuclear weapons; bin Laden is still at large; we are still at war in Afghanistan; we are still occupying Iraq (I wonder how things would have turned out if President Roosevelt had invaded Panama a month after Pearl Harbor?).

My country is bankrupt, our national standing is lessened, the sacred blood of our youth and the wrested treasure of our collective labor have been squandered as though they are worthless.

I will never forgive President Bush and Vice President Cheney and their cabal for the wantonness with which they acted, and the travesty that they perpetrated on my nation.