For years, I didn't own a car, and I'm not proud to say that I had a certain smugness about it. If I'm honest I'll admit to a pleasant glow when people would react with disbelief, especially when I lived in SoCal.  "I ride my bike," I'd say, or "I rent a car when I need one." Git.

Anyway, for years I could afford to pay a little extra in rent to live where I really wanted to live because I didn't have a car payment. Honestly, I didn't know how others did it. I had trips to Thailand and Norway that wouldn't have been possible if I'd had the costs of private transportation, and I lived right in the heart of urban areas which obviated the need. In Denver I'd take the 6 bus to the 52 bus for much of the year, though sometimes I'd have the White Blight, the old 1979 Chevy Caprice Classic that the Jesuits had bequeathed to the admissions office for in-state recruiting. It was worth about a buck seventy so I think they didn't care if I took it home with me sometimes. But for most of the year I didn't have a car, and I got along fine. I got to know Denver in a different way than had I been passing it at 35 miles an hour in sealed comfort.

When I was 36 I purchased my first car from Mrs. Takamura, in Honolulu, for $1200 cash that I had to borrow from a friend. It was my dream car - a 1986 Oldsmobile Cutlass 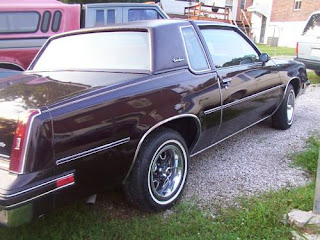 Supreme, two door. Cutty. I loved him. (Here's what he would have looked like had I had him restored - same color and everything.) He polluted badly, both doors were banged up and he had roaches inside - I had to bomb it with bug spray, twice - but man, what a ride. I could steer with one finger, and it had an original Delco with the preset radio buttons that made the needle jump when you pushed them in. It had power everything, though, okay, the power seat adjuster didn't work on the driver's side.

It was a hooptie, a "cholo car" according to one friend, a behemoth that was bigger than you'd think. On the days when I drove to work and had to park in tiny little spaces designed for mid-90's Accords, I never worried cuz I'd just park next to the wall and bang my door against it. It was already dinged up, so why did it matter? It didn't. When I'd drive over the Pali I'd careen down the mountain, aiming more than steering, riding the brake a little. When I'd go Windward side I got a lot of looks, and more than one bruddah pulled up next to me and said "Eh, nice ride brah!" and we'd exchange flashed smiles and shakas. When I'd drive out to the parking lot at Ka`ena Beach park up past Makaha, I'd leave it unlocked; no one ever took the floor mats or lighters or change from the ashtray. I never worried about Cutty; I owned him, he didn't own me. And I loved that car. It didn't have glass T-tops or spoke rims, but man, I loved that car.

Oldsmobile, the company that made the Cutlass Supreme, was founded in 1897, and was the oldest car brand in America when it was phased out, beginning in 2000 and completed by 2004, when the last Oldsmobile rolled off the line. Sales in 1985 topped 1,000,000 cars, and it was the third most popular brand behind Chevrolet and Ford in that year. In 15 years it went from being #3 in US sales to being eliminated.

My current car, Christine, a silver Pontiac G6, is one I'd wanted for a while. 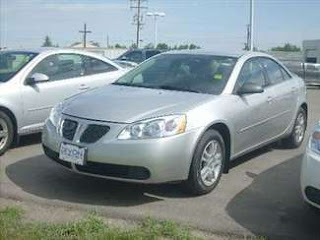 This was the car that was going to save Pontiac - it was well reviewed, well designed, good on gas, safe, fun to drive, and it didn't look like everything else on the road. When they first came out I was dizzy with lust - I really wanted one, and I looked at them, but reason prevailed and I didn't drop money I didn't have on a new car. I waited two years, renting one every chance I had, until there was a good selection of used G6's - and then I sprang. (I am devoted to American cars.  I have always preferred American cars, visually; I just love 'em.)

If you'd have told me in 1985, the year I got my driver's license, that Oldsmobile and Pontiac would both be eliminated in money saving moves to keep GM from executing bankruptcy plans, or that Chrysler would 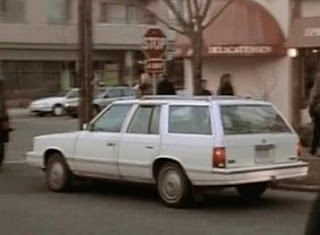 probably not survive the year, I absolutely would have believed you. 1985 was a great year for Oldsmobile, but a terrible year for Detroit, for Union labor, and for American cars. My parents had a used Reliant K wagon (photo right, ours was red), which inspired our mechanic to ask my mom if she scoured a three county radius to find lemons.  They had a Plymouth Volare, stick shift, which, to quote Tom and Ray, was completely unencumbered with the engineering process - you would have to kick it into 1st gear on dry days, and on wet days, well, you just started in 2nd.

The movie Mr. Mom was released in 1983 and Gung Ho came out in 1986, both based on the premise that the American auto industry was shedding jobs; I remember people joking about bumper stickers that read "The last one out of Michigan, turn off the lights." I had two brothers who couldn't find work and so moved to Texas, like thousands of other midwesterners. I remember the federal government bailing out Chrysler (and me writing a fan letter to Lee Iacocca telling him that our family always bought Chrysler products and that I hoped he could make it). I remember people talking about high gas prices, and while I'm just young enough that I don't remember gas lines, my family did and we talked about it.

So where was the leadership over the last 25 years? Where was the long term planning, the discipline, the preparation and execution of agile contingencies to accommodate higher gas prices, new market tastes, or evolved economic realities?

It wasn't there, and now we are looking at the world's largest corporation, GM, going into receivership, the likely bankruptcy of Chrysler, and the elimination of two founding components of the American century, Oldsmobile and Pontiac. They aren't going to be the last. Here's hoping we learn a little something from this round. I'm tired of buying stuff from companies that get eliminated.
.

Damn, Brennan. You need to get syndicated... but then again, newspapers ain't doing too well, either. Oy.