I love Sporcle - they have great quizzes and I almost always learn something, even if it's that I'm not as smart as I think I am (and who doesn't need reminded of that now and then?).

Their latest quiz (here if you want to try before reading on and hearing the spoilers) was to guess the countries projected to have the largest populations in 2050, as reported by the US Census Bureau International Database.

Bangladesh, to pick one of the more egregious examples, has a current population of 154 million, or about half that of the U.S., in an area slightly smaller than Iowa. This works out to a population density for the whole nation that's equivalent to that of New Jersey, our densest state. Per capita income in Bangladesh is US$1500, and one of the nation's largest export is its people, who go to work in Persian Gulf states and in southeast Asia and send remittances home. If projections hold, Bangladesh will have a population of 233.5 million, or an additional 79.5 million more people, in forty years.

That is like adding the population of Turkey, itself the 17th most populous nation on the earth, to Bangladesh over the next forty years.

How can Bangladesh, which is now a "...poor, overpopulated, and inefficiently-governed nation," cope with adding Turkey? And while Bangladesh is growing by 50%, its rank in the world's population table actually DROPS, from 7th (2008) to 9th (2050) - it's overtaken by Nigeria, growing at a shocking 81% rate from 146 million to 264 million (which is like adding every man, woman and child in Mexico, the world's 11th most populous nation), and Ethiopia, tripling its population from 82 to 278 million (which is the near equivalent of adding Brazil, #5).

Nigeria is a highly unstable state with a Christian and animist south and Muslim north, a weak central government, and strong inter-state rivalries between those with large deposits of oil and natural gas and those with less or none, but at least Nigeria has some resources and most of its people are literate and fed - though the challenges of feeding and educating Mexico on top of Nigeria for Nigeria's fragile infrastructure and resources is just staggering.

Ethiopia's per capita income is US$800; 80% of its people rely on agriculture and most of the state's economy is dependent upon coffee production and the hard currency coffee exports bring. How can a nation dependent upon crop exports feed 2.5 times more people? Ethiopia cannot feed itself now; how will they feed Brazil, too? If projections hold, there will be 38 million Ethiopians under the age of 4 in 2050. That's Poland - an entire nation as populous as Poland, under the age of 4. 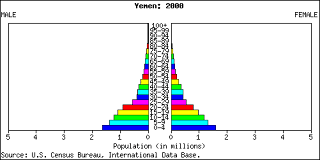 These aren't the only examples; there are plenty just in the top 30 most populous nations. Sudan's population is projected to go from around 40 million to over 88 million people (like adding South Korea's total); Yemen from 23 to 71 million (which is like adding South Africa's total to a county with only 2.91% of arable land); Madagascar from 20 million to 56 million (in a country with only 5% of arable land, a failed central state and a recent coup d'etat). 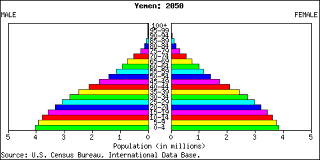 The United States will have enough challenges accommodating the 135 million more of us there are expected to be in 2050 - which is like adding the current population of Japan to who is already here. How will we handle it? We can't rebuild the bridges we have now, so how will we provide the necessary infrastructure for another large nation's worth of people? Where will we get our water? And if we don't know how we'll manage, then nations with weak systems, insufficient resources, poor central planning and no money are likely going to be overwhelmed by the task.

This is truly mind boggling. It is almost impossible to imagine.