The other elephant in the room

People here are poor, and many, many people here are very, very poor. You can’t really wrap your head around the numbers. To define what we’re talking about, the poverty line is set at 80 taka / person/ day, or about a dollar a day, and 49% of Bangladeshis are at or below the poverty line. That's 71,000,000 people, or slightly more than the entire populations of Argentina and Peru, in an area smaller than the state of Illinois, living on less than a dollar a day.


About 20% of rural households (which equals almost 23 million people, since Bangladesh is 85% rural and has a population of about 142,000,000 - so we are talking about more people than in all of Australia, or about 2.5 times the number of people living in Haiti) live in what's called "extreme poverty" which means, a.) that they suffer from food insecurity (they go to bed hungry frequently, much of their days are spent trying to acquire food, they often do not know from where their next meal will come, or of what it will consist); b.) that they have no access to land; c.) that they have no access to means of production or assets (like a bicycle powered rickshaw, say, or a goat). Many fishers are in this category, which another reason why the depletion of freshwater aquatic resources is so critical, and so alarming. Within this country slightly larger than Iowa you've got the equivalent of Australia's entire population in extreme poverty.

Alongside them, in the same physical space, there are another 33,000,000 people, which roughly equals the entire population of Canada (the whole country), who are considered "moderately poor" meaning that a.) they may own or be able to lease a small plot of land, or some livestock, and that for most months of the year they have enough to eat, but their diet lacks the necessary protein (see above re: declining fish stocks) and variety to be considered healthy. In other words, they are one setback away from disaster. And this is a country with 80% of its land at 10m above sea level or lower; you can see population density by elevation here. Dhaka and its 15 million people (or the equivalent of the entire population of Guatemala, that is relatively poorer than Guatemala, in one city) has an average elevation of 4 meters. So one setback could be a typhoon. Or another few years of global change. Not that those are discrete categories.


So you've got the population equivalent of Australia plus Canada who are the rural poor or the rural very poor, PLUS another 81,000,000 people, or roughly between the entire population of Germany (82,000,000) in a country smaller than Iowa.


As I said, it is hard to wrap your head around the situation.


The poor are not hidden or segregated, simply because they can't be. There are too many of them. 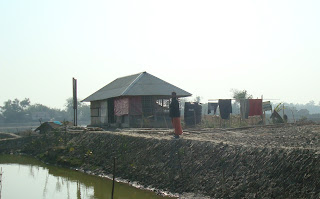 Last weekend, I visited three rural villages. This (right - click to enlarge) is one of the best homes that I saw, provided in part through an NGO to this villager who is now a shrimp farmer. You can tell it's one of the nicest homes because it has both a cement foundation and a tin roof - both of which are rare, but to have the combination in the same home is a local signifier of wealth. According to the community surveys that were conducted by the workshop participants, these two factors put this household in the wealthiest 7% of residents of his village. He's doing well. (Another view, below.) He has a steady source of income from the shrimp farm, a few chickens (which were in the house, so I kn 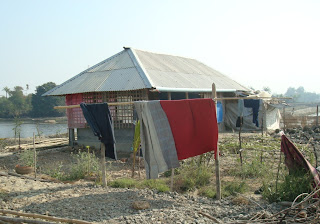 ew they were his), a water catchment tank (to the right of the house in the picture above, provided, like thousands of others in this district, by USAID) for "sweetwater", and relative protection from storm surges based on the home's elevation.


Many, many people are doing far less well. They spend hours a day trying to get water, to start, and then hours more trying to get food. If they have a goat, they may have to walk miles to find a bit of pasture land. If they don't have a goat or a cow, maybe they can try fishing but fish stocks have plummeted dramatically due to overfishing, destruction of habitats (dams, bridges, canals), and due to pollution - toxic water run off - from garment manufacturers. (One of the workshop participants found that in Baikka Beel, one of the most productive and critical of Bangladesh's freshwater wetlands, there was up to a 50% loss in fish production due to effluent. When you buy clothes made in Bangladesh, that low price might be due to the manufacturer skirting pollution laws. Or paying its employees nearly nothing. Or both.)


Do you catch brood fish - i.e., fish that are about to spawn - knowing that doing so will affect the long term health of the small lake that you were born next to? Well, if you are hungry and your family is hungry, you probably would.


The poor are not limited to rural areas. Many in Dhaka and other major cities - Chittagong (3 million), Khulna (2 million), Sylhet (1 million) - are extremely poor as well. Walking home from dinner the other night I tried a short cut through one of the narrow alleys that are webbed through Dhaka, and I saw, at ten at night, a boy who couldn't have been more than five, impossibly skinny, breaking bricks. He was literally breaking bricks. To what purpose I don't really know, but when I walked down the same alley a few days later, during the day, an emaciated women and two girls were in the same spot doing the same thing. I had my camera both times but I didn't take their pictures - I couldn't.


People in the rural areas know that the standard of living is higher in the cities, of course, and there is a lot of internal migration. Millions of people move from land that is exhausted, or polluted, or unprofitable, or salted by storm surge, or which has been divided up among family members until it is too small to farm, and move to the city - where they are homeless, where they can't get clean water or access to education for their children. There was a photo in the paper recently describing as "lucky" a kid growing up on the sidewalk around the corner from my dorm because his mom - an internal migrant from the country - was insisting he learned how to read and write. (Photo and caption here.)


The beggars can be quite persistent, which I understand. There are children, men and women - with emaciated or deformed limbs - legs the size of sticks, literally no more than six inches around from foot to hip - eye sockets permanently blinded and shut with scarification, and thousands and hundreds of thousands of homeless. It's a beautiful country, but it's also a country of dire poverty and what can only be described as ugliness. And the juxtaposition can be shocking.


Bangladeshis are to some extent inured to this. It's their normal, part of their experience. Many of them give to beggars, and undoubtedly this support keeps recipients alive. The state - moribund, weak, hopelessly corrupt, and destitute itself - is incapable of the structural changes necessary to break the structural poverty and to redress this on any significant scale.


The shocking thing is that much progress has been made on poverty in this country. The rate had dropped from 69% two decades ago to today's 49%. In part that is due to remittances (over a billion dollars a year and climbing); in part it's due to international aid (two billion a year); in part, yes, it's due to exports, led by the garment industry.


I can't imagine it a third worse than it is right now, like it was in 1990, but then I can barely imagine it now. And the projections are for a lot more people to join those already there by 2050. Bangladesh is one of the south Asian countries with its population under control, but there are still going to be 80,000,000 more people in 2050 than there are now, which would bring the total to 233,000,000 or so. Which is over two thirds of the current U.S. population.


Which is adding the current population of Germany (or Spain AND Peru AND Taiwan) to who is already there.


In a country slightly larger than Wisconsin.

You do a good job at helping us "wrap our heads around it". Well done.