As reported in the LA Times and elsewhere, Bill Belichick, coach of the New England Patriots, grabbed a referee by the arm after the game to yell at him about what he felt was poor officiating - though he has now said it was to get "a clarification" which likely no one west of Amherst believes.  After the game, Belichick was quoted as saying "You saw the game. What did we have, 30 penalties called in that game?” Actually there were 24 penalties called, Bill, and more penalties for more yards were called on the opposing Baltimore Ravens (14 for 133 yards) than on your Patriots (10 for 83 yards). The whining sore loser inflated the total penalties called on him by three times (coincidentally roughly the ratio his talent is inflated by most of the media), and was so outraged that he felt the need to grab a ref - which is strictly verboten in the NFL, though of course Belichick plays by different rules that everyone else.
And that's the point: Belichick wants to have it both ways.  He can't.  He can't like rules when they work in his favor and blatantly disregard them when they don't.  You can't cheat - and get caught cheating, and get fined $500,000 for cheating in what was a gross display of contempt for the rules - and then complain when the rules are applied in a way that you feel is arbitrary.

Bill Belichick got caught cheating - in front of God (a/k/a the Commish, Roger Goodell) and everybody - and got away with it.  There are no asterisks on their "wins".  No coming clean. No reckoning to the rest of the league just what all they did despite a senior US Senator getting involved. Just a surrendering of six tapes that were immediately destroyed by the league, and a cool $500,000 fine on the Nixonian coach.  But unlike Nixon he's still coaching, and he's still complaining about the rules being applied unfairly. Sorry, Bill, you don't get to do that. 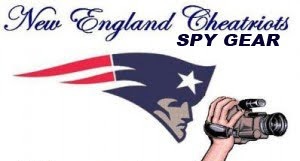 In the first game of the season in 2007, the Belichick-coached New England Patriots were caught filming the play calls of the opposing sideline.  What's the big deal?  Well, for one, this is explicitly prohibited by the NFL, and the Cheatriots KNEW it.  How do I know they knew it?  Because they had been caught doing it before, in Green Bay against the Packers, in 2006.  They were warned about doing it. They did it again. They did it AGAIN!

Apologists will scoff and say things like "So what? It didn't really help." Despite the fact that such an attitude shows tremendous disregard for the game, it's patently untrue.  Yes, it did.  It's common sense: why would they continue to do it if after getting caught doing it when they didn't think there was advantage to be gained by doing it? It does give you an advantage.  If you know what the opposing coaches are calling, what formations the opposing players will be in, and where the ball is going to go, all in real time, then you can respond - in real time.  It's a tremendous advantage.

Apologists for the franchise and for the coach bleat things like, "Well, everyone does it." Well, everyone doesn't do it. No other team has been caught filming. Ever. Except one: the Denver Broncos. Their coach at the time? Josh McDaniels. And where had he been before coming to Denver? Go on, guess. If you said "New England under Belichick" then you win. And again, why do it if it didn't give you an advantage? The answer is, you don't. It does give you an advantage. Just like Belichick's cheating on use of the Injured Reserve, explained by a former Patriot player here. The salient quote? "Belichick will do anything he can to get an advantage." Anything he can, and rules be damned.

To quote Jayson Braddock in his excellent and exhaustive post "New England Patriots Can't Seem to Win a Super Bowl Without Cheating," worth reading in its entirety, here:


Like I said, I think he (Belichick)’s a great coach but we can’t look past his flaws. His most effective decision was to video tape the defensive signals. It provided him with three Super Bowl wins and has people asking if he’s the best coach ever. If he knew he could cheat, get caught, and still be held in high opinion, why wouldn’t he cheat? He also knew that if he understood the divisional team’s signals, that he could take that path to the playoffs yearly. It was brilliant… cheating, but obviously no one cares, so it was brilliant.

When did the Cheatriots win* their Super Bowls? In 2002, against the heavily favored Rams. In 2004 against the Carolina Panthers. And in 2005 against the Philadelphia Eagles.

When the cheating scandal went down, Bob Ryan, a sports writer for the Boston Globe, the hometown paper, wrote in his column titled "With Belichick, the coverup is most revealing":


Here is what Bill Belichick has done: He has placed Patriots fans on the defensive for the rest of their lives...  In fifty years... (the Patriots) will be, in the eyes of many, the reverse Black Sox. They will be the team that broke the rules. Their three Super Bowls will be regarded as ill-gotten gain.

Right there with you, Mr. Ryan. Except your fans have no shame.  Like much of the rest of Americans, their side won so who cares?  So what?  No big deal.

Since 2007, how have the Patriots done?  Very, very well, over all - in the regular season.  But they play in a weak division.  And they haven't won a Super Bowl.  They've lost twice, to the Giants both times, who were underdogs both times.  The NFL is built for parity, and every advantage - no matter how small - is significant.

I am not going to pretend I'm unbiased here. Football unhinges me in ways that nothing else, not even politics, seems to do. And I hate the Patriots*. But the facts are there: Belichick is a cheater, consistently (IR lists, taping). And once you cheat - systematically, deliberately, to give yourself an unfair advantage outside of the rules against the other team and to do something that no one else in the league is doing - then you no longer get to whine like a three year old coming up out of nap time when the calls go against you.

There is no active coach or franchise who has so disrespected the game, the rules and the league like Belichick and the Patriots*.  They are very, very good again this year.  Despite the two losses they may well still end up in the Super Bowl again this year thanks to a very soft schedule and unquestionable talent.

But they cheat.  In the past, they cheated consistently for a significant advantage.  They won* razor thin football games in the playoffs and in the Super Bowls, so every advantage helped.
And once you cheat, Coach Belichick, it would be a good rule of thumb not to complain when the refs blow a call and one doesn't go your way.  Be a man.  Learn how to take defeat.  Learn to respect the game.