Missed stories of the week

It was a tough news week and most of the reading is grim, but there was more happening than events in North Africa and inside Governor Romney's coterie might lead you to believe.

1. Stories datelined in Somalia aren't often good news, but this week there were real signs of progress.  This war ravaged nation elected a new president on Monday, the first "fair and free elections in 40 years." From the Guardian: "Somalia chooses new leader in Presidential elections."  Why care?  Because it's good news for the people there, if nothing else.  They have endured a LOT.  And their newly elected President survived a suicide bombing attempt on his life after just two days in office by al-Shabaab, the Islamic military extremists in his country, probably because he was clear and direct in his assessment of them: "Al-Shabaab targets everybody who is doing something against them– a woman in civil society, a traditional elder, a businessman, a religious leader."  And now himself as well. 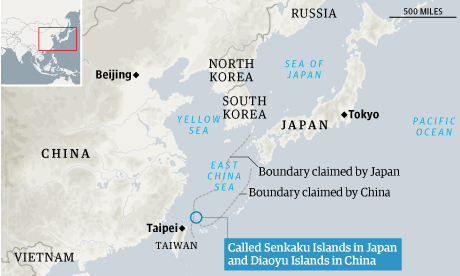 2. The nations with the 2nd, 4th and 19th largest economies in the world are playing a dangerous game of chicken in the South China Sea.  There are some islands southwest of Okinawa called the Senkakus in Japanese, the Diaoyu Islands in Mainland China, and the Tiaoyutai Islands in Taiwan (map right, from the Guardian) that are the subject of a territorial dispute.  China didn't really care about them until 1968 when there were suggestions that there might be oil beneath them.  Since then, they've started to care. A lot.  A private Japanese landowner this week sold them to the National Government of Japan, and China doesn't like it.  The Chinese government media organs have orchestrated street protests against the Japanese and then tried to tamp them down; the Japanese national government is being goaded by the nutbar nationalist mayor of Tokyo, the nutbar nationalist mayor of Osaka has formed a new political party and is suggesting that Japan should exercise its military right of engagement, and China is sending naval vessels to patrol the waters in the area.

A war could break out if the navies and coast guards of all three nations make even a small mistake given how high nerves are on either side of this dispute.  Cultural events around Japan were being cancelled - a cartoon show in Aichi, a cruise ship welcoming in Kobe, and pop stars are cancelling concerts in each others' countries.  We have military assets in Okinawa, Guam and South Korea that are all within shouting distance.  This is unlikely to end well.

3. Honestly, Uganda, methinks thou dost protest too much.  It's like you are that homophobic bully in high school that sees and talks about queers everywhere, perhaps in the hopes of finding one yourself?  You may remember Uganda as the place where - with the help of US "Christian" missionaries - they proposed a bill that would criminalise homosexuality and make certain practices punishable by death.  Because, you know, that would stop homosexuality. Most recently they've jailed a British producer, David Cecil, for staging a play in two theatres in the capital about queerness in the country.  If convicted, he faces two years in prison.  Brave man.

4. As reported in La Presse, here (in French) (more prominently than in the Japan Times, where I had to go look for it after reading it in La Presse) Japan will follow Germany and Switzerland and has made it a policy goal to be nuclear free by 2030.  Honestly, I don't know how they are going to do it - they rely on nuclear energy for 30% of their electricity consumption, and eighteen years is not very long to bring online that much additional non-nuclear capacity.  If anyone can do it the Japanese can, but I'm sceptical.  Still, given their complex and traumatic history with nuclear power one can understand the impulse.

5. And because this week was especially brutal I wanted to find a good news story to close on.  The Bangkok Post reported here that a fisherman from the Pacific Island nation of Kiribati survived adrift in the Pacific for 106 days.  He was in a 15m boat with a friend and colleague when they had engine trouble.  His friend didn't make it, but Toakai Teitoi survived on rain water and fish.  His first request?  A smoke.