In her recent column "A Place Called Hope," in The New Yorker (the Feb 2, 2009), Nancy Franklin, the TV critic, wrote a great piece on the Obama Inaugural. She covered the coverage of everything from the train ride in to the District, the volume (numbers and decibels) of the crowds that each network broadcast, the collective anxiety many Americans (and others) shared for the safety of Mr. Obama, the degrees to which talking heads talked (or didn't) about race, and the joy of so many Americans who watched in disbelief, in wonder and in pride. Ms. Franklin concluded her piece by saying:

The morning after the Inauguration, something felt wrong to me. I was sad and unsettled, as if I’d had a bad dream. Later in the day, I realized how far away I’d felt from the events of the previous days. I’d seen Obama become President, verified that—phew!—it had actually happened, but I hadn’t felt connected to it, except, oddly enough, when I watched scenes of other people watching it on TV, like elderly black men and women, who sat at home and wept as they saw something that they had never imagined would happen. I should have put the remote down and got myself to Washington and stood in the crowd, freezing and cheering, maybe even, for the first time, waving a flag. January 20th might have been the greatest day in my lifetime. By watching it on TV, I’d missed it. ♦

I was there. We were pretty far down the Mall, a mile or so from where President Obama stood to take the oath and deliver his address, but it didn't matter - we were there, in person, sharing a profoundly moving and important moment in fellowship and secular communion with relieved and proud and joyful like-minded Americans.

And I, "...for the first time, waving a flag," stood there among them, my fellow Americans, and felt so proud of my country and of us, my countrymen and women. We got it right.

I continued to shake my head in joy and 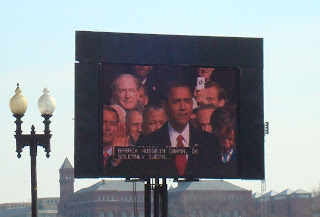 disbelief, watching "Barack Hussein Obama" take the oath and deliver an address in which he recalled that 60 years ago his father may not have been served at a lunch counter near the spot where he stood now as our new President. What must it have been like for elderly Black folk, standing near me, watching with me, to hear those words? Maybe they were thinking that finally all those words we had told them all those years had truth. Maybe our nation, which had enshrined in our founding documents the notion that a slave was 3/5ths of a white person, could in the words of Dr. King finally keep its promissory note to all its citizens.

It made me think about the shoulders on which we, all Americans, were standing. Nearly viscerally I felt that I was reaping what a previous generation had sown; that the sacrifice of the brave men and women of the Civil Rights generation who had called us, all Americans, to be better people, to live up to what had been promised to all citizens, to be afraid no more and to do what was right, had finally borne fruit. Frederick Douglass and Rosa Parks and John Lewis and James Groppi and Walter Reuther and that crowd who 45 years earlier had faced the other direction on the Mall, toward the Lincoln Memorial, to hear Dr. King, and all Americans of conscience who had worked in their own time, perhaps never daring to dream of this day coming in their own time, had made it happen in mine. Standing there I was so proud of them for not giving up on perfecting our Union. Proud, and humbled, and deeply, deeply grateful.

I felt and saw "We the People" all around me - the laughing and dancing high school and college-aged kids of every color of human skin, and the sweet elderly white lady

with the thick, central casting Brooklyn accent who told Joe where to stand so he could get a better view, and the Sikh man in a dastar, smiling almost giddily as he waved his American flag, and Americans of every color and age and presumably every creed and no creed. And everywhere in the crowd I saw the dignity of older African American men and women, who, by their presence, with tears streaming down their faces, so generously shared the power of their collective courage and experience. It was an honor to be there with them. We the People.

How dare anyone say ever again that some of us are less than American just because we live in cities, because we don't go to their church or any church, because we have structured our families differently, because we are poor, or immigrants, or indigenous, or think differently?

We the People stood on America's front lawn on January 20th in the cold - and it was bitterly cold - and we waved our American flags, and we cried our tears, and we hugged our loved ones, and we gave witness to our fellow countrywomen and men and to the rest of the world by our collective presence; witness to something powerful: to commonweal, collective effort, rewarding merit, working together, and judging all children by the content of their character. E Pluribus Unum.

power peacefully from one leader to the next - and the official day was unquestionably impressive. But Inauguration Day on the Mall wasn't about President Obama, it was about us. And I'm sorry Ms Franklin, but I'm afraid you're right; yup, you missed it.
Posted by Bren in SoCal at 2/11/2009 10:49:00 AM

What a moving piece. Thanks for sharing your inauguration experience. It is amazing to see what was once thought impossible actually happen. Even though I am not an American, I feel the significance of Obama's election. It feels like the good guys have finally won.
For those who may be interested, here is a gigapan photo of the inauguration. I am not sure why, but I really love this:
http://gigapan.org/viewGigapan.php?id=15374&window_height=701&window_width=1407

I wasn't there. Unfortunately. However, I watched it. Glued to a TV for longer than I've been in, well, my lifetime. Oblivious of the time. THIS IS HISTORY! White I am, and connected to many Africans (yes, from Africa), and African-Americans. Wondering how those who fought so hard to be able to share the same bathroom as I, must feel. (Later I asked and heard stories filled with emotion as my African-American brothers and sisters tried to express that which is beyond words.)

I am proud, so very proud to be from our United States. I believe Obama will be a connector, a healer, not just for those in these States who have been ostracized, shunned, spat upon, considered less, or marginalized in any way. I believe he will draw a divided world closer. Through the example of our new president, I believe the world has a chance to begin building a road on which differing views may peacefully travel. (Beginning being the operative word - it will take yearS of practice for humanity to act often enough that peace prevails.)

I know I will not agree with everything President Obama does. In fact, already I've disagreements. However, the reality that within the leader of our country is a person of many backgrounds, innate intelligence, a seemingly strong rootedness within himself and his family, fills me with hope.

I like this, Steve. And I'm so glad that you were able to be there.

BEAUTIFUL. I took vacation and watched it on TV. There was no way I was going to be at work. Unfortunately, I recently also watched HBO's Right America: Feeling Wronged . . . WHOA!