I worked on or had a paper route in every one of the Fowler years, or the years that I can remember, anyway.

Fowler, Indiana, and the whole county had its own paper, the Benton Review, but that didn't need to be delivered. You got it mailed to you at home or you bought it at the IGA on Thursday, but there was no route. That saved some poor teenager(s) a lot of trouble - everyone in the County took it, and it only came out once a week. The social situation in Benton County what it was, you had to get it and read it right away so you wouldn't be behind on the times. You wouldn't want to be the last one to know who was entering what at the 4-H Fair, or be the last one to get that new recipe for zucchini bread, or get double booked and thus be unable to attend the Ladies' Altar Society's monthly supper.

I only once got a mention in the Benton Review, and that was after we'd moved away - I got busted for speeding just inside the Benton County line, near Templeton, driving up US 52, a four lane divided highway, to our dentist in Kentland with my brother Chris. That was one of only two speeding tickets I've ever received, and that was 1986 (the second was in 1991). (Makes you wonder what the cops are doing, really. Oh yeah, pulling me over on suspicion of grand theft auto. Or of knocking off a 7-11.) That ticket was earned only four years after we left Fowler so 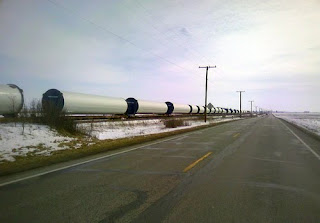 there was a chance that Ma would see the Benton Review, and thus learn about the ticket, and thus restrict my driving privileges. My friends the Schwartz's helpfully saved the Police Blotter column for me, and I still have it somewhere. "S. Brennan, LaFayette, Ind., speeding, 69 in a 55." My claim to fame in my hometown.

But there was more than one paper that you could get in Fowler in the 1970's, and while no one I knew got the Chicago papers, our family had the Sunday morning Indianapolis Star route. The Star would come to us in sections, with ads, comics and lifestyle arriving Thursdays and news and sports coming on Sunday mornings. The whole thing would then need to be stuffed together, rubber banded, and delivered early on Sundays. I would often help with stuffing but I only remember actually delivering it twice. It was the "big boys" route, mostly, but stuffing was a crappy job, so I got to do it.

When I was a little older, us "three little kids" had the afternoon daily, and I got to do more than stuff. There were two routes in town - we had the southwest one and another family had the other half of town. The papers from the Lafayette Journal and Courier distributor would arrive every day at 2:30, which meant that during the summer I'd ride my bike or run home from the pool at the 2:50 ten minute break. (At the Fowler Pool, hours were 1 to 5 [well, 4:50] and 6 to 9 every day, with a ten minute break every hour at :10 minutes to. I've never heard of this break at any other pool. I guess the pool closed from 5 to 6 for a dinner break, but why the ten minute break? No idea.) During the school year, the papers would be there waiting for me when I'd ride home or take the bus home from Sacred Heart.

The J&C came bundled in a stack, wrapped in brown paper with a slip with that day's count, and banded with wire. To prepare them for delivery they had to be cut out of their bundle, counted to make sure the daily slip was accurate, rolled, rubber banded, and stuffed into bike saddle bags which went over the rear fenders of our bikes. In the years we had TV in Fowler, Tom and Jerry would be on at 3:00 p.m. and sometimes we'd roll the papers with that playing in the background. I was a fast roller and I enjoyed that part: folding the papers into 1/4ths, grabbing a green rubber band from the pile on the threadbare living room carpet, putting it around the top, twice, pushing it down to somewhere in the middle, flipping the finished product onto the pile, and grabbing the next one. When there were just a few left, someone would start stuffing the saddle or shoulder bags with the rolled papers, fold side up for easy pulling and flinging.

We delivered the papers off our bikes, most of the time, unless it was really snowy and then we'd walk the route with a sled. I distinctly remember riding my old Schwinn in the snow, though - it had to be pretty bad for us to walk it. I don't ever remember getting driven for the daily paper, though sometimes on Sundays, after the big boys moved on to better jobs and the Indy Star was delivered by someone else, when the J&C was on a morning delivery schedule, dad and I would wake up early, just the two of us, and deliver the papers by car. We'd then go to 7:00 a.m. Mass and come home and make waffles for the rest of the family who would go to the 9 o'clock Mass, which was longer but had guitars. But that's a different entry. 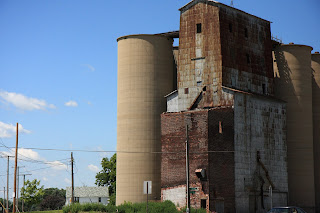 For the afternoon daily route, though, it was almost always on my bike. I'd put the saddle bag over the rear fender of my Schwinn - or whichever Schwinn was in working condition - and I'd head into town. (Starsky's, Wagoner's, then you'd ride up past the grain elevator [above], over the tracks, across US 52,and down to 3rd street... as I sit here 30 years later, it's a little surprising to me that I could still do the route, maybe in the way that some people remember cheer leading routines or the Gettysburg address. I don't know where my checkbook is or when my siblings' birthdays are, but I could still do most of my paper route.

(I found a pic online here of roughly how I looked delivering papers - I was that skinny, definitely, but my bike was nowhere near that nice; and instead of "Houston Chronicle" on the white saddle bag that hadn't been this clean in years, it read "Indianapolis Star" in worn orange 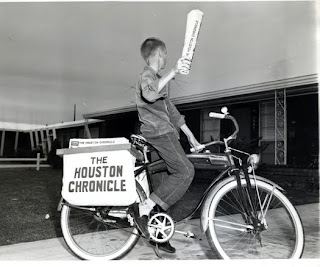 We'd do a few houses on the other side of 5th, Fowler's high street, and then deliver to the businesses downtown. Growing up, Fowler supported two drug stores, Rexall's (closed) and Denny's (attractive, isn't it?); a men's clothing store, Muller and Muller (closed); a full service jeweller, Korbe's (closed); a bowling alley; a movie theater (still open; new pics here); two hardware stores, Western Auto (closed) and Dorsey's (still open!); two restaurants/cafes downtown (that I remember, there might have been more but two took the paper), the Flashing Arrow Cafe (long gone - the building has been razed but it would have been in the left foreground where the white car is parked facing the street) and Buc and Mason's (now Kidwell's Family Restaurant, still open); Molter's Mower Sales and Repair (closed); two insurance agents (it looks like there are three now, one of which you can see on the left [south] side of 5th Street, third building up); and a few taverns: Hank's, the Uptown Bar, and the Local Tavern. There were also three grocery stores, the Grab-It Here, Furr's Home Market, and the IGA.

(By the way, that first building on the left side of the street at 305 Fifth Street is the Fraser and Isham Building, built in 1895. More - much more, including photos of interior and exterior details - can be seen here. No tenant of the building ever took the paper, so I've never been inside.)

Brought back memories of my own paper route that I shared with bro and for a while my sis. The dogs, trying to get people to pay, the snow!

It was the Southtown of course-"People up North just don't get it!"

Having also grown up in a rural enviroment, I relate to what you are describing. I think I would like to visit Fowler someday. I bet it will remind me a lot of home.
By the way, Happy Blogiversary! Does Hallmark make cards for this now? I bet it does. At any rate, congrats on the first year of your blog! I know I hassle you about your post count, but looking back on this past year, you have actually posted a lot, and, more importantly, posted well. Here's to another great year of Bren's Left Coast!