It's taken as an article of faith in my family that "Brennans love road trips." All of my siblings, though my brothers in particular, have elaborate stories about epic trips when they + another brother/ friend/ hitchhiker went from Tierra del Fuego to Alaska in an AMC Rambler in 27 hours, and how much fun they had doing it.

I am not immune: One evening, after wrapping up business in Cincinnati, I drove to visit a sister-in-law who was laid up during a difficult pregnancy. When I walked into her Knoxville hospital room, surprising her, she asked "What in the world are you doing here?" I answered "Well, I was in the neighborhood..." She loved that line, but to my mind there was truth to it - Cincy is a lot closer to Knoxville than Chicago, so why not?

I have an atlas on which I've highlighted every road I've ever driven in the US, and I will look at it before I take a trip and drive new roads, just to have more to highlight, more to see, more memories to steal away. I've had some epic hitchhiker experiences as well - from Denver to LA, from Sacto to Tahoe, across Nevada, in Hawai'i, outside Arcata, the length of California - and I've always loved throwing a bag in the car and heading out.

Why is this, this centrality of road trips in our shared family lore, and individual pride, and myth-making? We all cut our teeth on the same road trips growing up, after all. We spent the same number of interminable hours on sticky vinyl seats, with no air conditioning, fighting or avoiding fighting with siblings, being sick or avoiding the physical manifestations of sickness of siblings, shoving siblings' things out the window.  And all of this while our - well, what else can be said? - heat-crazed, exhausted, clearly en-maddened parents drove us across four states to get to a campsite, or a lake, or a historical marker, and all while they yelled at us to "Wake up!" or "Put that book down!" so we could "Look at the scenery!" or "Pray the rosary!" So why, given this background, did we all, without fail, as soon as we each had the resources to buy, beg, or borrow (or rent, in my case) a car, grab a sibling or a friend or a hitcher and an atlas and go on a road trip?

But we did. (Stockholm syndrome, maybe?)

My first childhood memory of a family vehicle is the 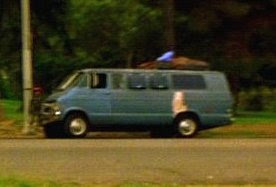 Tan Van. It was a Dodge Tradesman Maxivan, or what some friends have since called the church bus, with two bucket seats up front, an engine that protruded in between them, three bench seats, and an extended storage area in the back. (Driver's view, right, exactly our model.)

Each bench seat could accommodate three seated people, which is nine, plus Mom and Dad in the front bucket seats, which is eleven, which leaves me, #10, to sit on the engine, facing backward.

It wasn't the safest perch in the van. Had we hit anything I would have been thrown into the windshield at such an angle that my head would have been forced into my sternum, snapping my neck instantly, before the glass shattered and spewed me out of the van into whatever it was that had just been hit - but it was the 70s. No one had accidents.  Which was just as well, because no one had seat belts.

I don't mean that metaphorically - literally, no one in that vehicle had seat belts. Our Tan Van had rusted out so badly that you could see the road rushing past underneath you, and finally it got to the point where my dad or a brother sawed a piece of 3/4" plywood to bolt onto what was left of the van floor so no one would fall through. They drilled holes in the plywood so we could bolt the seats back in, but no one was drilling holes for the seat belt posts. They got left behind in the modification.

The plywood floor was an improvement on the rusted metal floor that had been there before on a safety level, sure, but the main advantage of plywood over rusted metal?  It was quieter. The previous floor was deteriorating sheet metal.

Know the sound of rain on a tin roof? Or the sound of a rock being thrown by a lawnmower into the side of a car? Imagine that incessantly, at highway speed, while you are lying on the metal in question. Throw in the whine of the tires, and you're there. That old floor had transferred the energy of every rock kicked up by a tire, every pothole not avoided, every drift onto a gravel shoulder into sound. We slept on the floor, on blankets, and we heard and felt it all. Despite that, we slept so soundly that when we'd arrive back in Fowler we'd have to be carried up the steps and into bed, but I guess that's being 7.

Until siblings aged up into driving, Mom or Dad would usually drive and the other rode shotgun; then behind them older kids on benches, then younger kids on the floor. Given that math, any more than three kids in the van and I slept on the floor. Which was a piece of plywood bolted into a van. With a bigger older sibling stretched out on a vinyl seat immediately above me unrestrained in any way. Going between fifty and seventy miles an hour on mostly two lane roads, for the 8 to 10 hour circuit from Fowler, to Raymond, Illinois, to Springfield, and then home.

Sometimes we'd do the whole circle route in one day - leave Fowler at 6 am, get to Grandma and Grandpa M's in Raymond, Illinois, at 10:30 or so, stay for lunch, drive to Springfield to see Dad's relatives, possibly stay for dinner, and drive home, leaving at 8:00 at night for the four hour drive back.

For our summer vacations, there wasn't even that.

It couldn't have been the traditional objective of a vacation: how could taking one or two weeks, loading us all up into the van, and driving to Michigan, or Philadelphia in 1976 to see the Liberty Bell, or Dallas, Texas, in the middle of summer after the eldest moved there for school (god help us, I think I'm still hot from those drives), have been a vacation? And it's not like the Tan Van was worry free driving. One Dallas summer trip, the axle broke in Sikeston, Missouri - on hour six of a fifteen hour drive. (I clearly remember it was Sikeston, because there was a road sign that had the US highway shields for routes 60, 61 and 62 together on one post. I was thrilled!) We sat in a city park, all of us who were on that trip (and I don't remember numbers, but I remember there were a lot of us, and I remember it was damn hot), waiting while it got fixed. That can't have improved our moods, and there were nine hours to go, packed into that van, sticking to those seats, fighting with those siblings.

Can you imagine doing that, now? No DVD players, no headphones, no video game controllers of any sort - only AM radio, books and the rosary. We would play car games to pass the time, and talk to each other in between the fighting, and see the country roll by us. From my perch up front, facing backward, sitting on a folded up blanket in the summer to protect my butt from the heat of the engine, I got to see things I'd read about flow out behind me: the Mississippi River, the Gateway Arch, interstate highways cut through rock in southern Missouri, rice and cotton fields in Arkansas and Texas - fields with standing water, fields with crops you couldn't eat - all things that made me realize that the way things were done in Benton County wasn't the only way to do things.

It was my introduction to travel as education. Through the encyclopedias I'd take on every trip so I could learn about the the crops and cities and state trees, birds, and flowers, as we'd pass through. Through the atlas I'd stare at for hours, memorizing the roads and the numbers and the counties. (I won't say that this initiated my lifelong love of maps and geography, because I don't remember a time I couldn't stare at maps for hours, but it certainly cemented it.) Through the stories read to me by my sisters, when I was a real little guy, and by my father when it was mom's turn at the wheel. He'd cycle through the Little House on the Prairie books, and when we got to "The Long Winter," regardless of time of year or where we were, we'd have to bundle up in blankets if we wanted him to go on. Through the stories my brothers would tell me about people they knew, from Chicago or Detroit or Minnesota; and what they'd learned in school, and they'd talk about music, or their worldviews, or family stories which, even then, involved cars.

After all I guess they were fun, those trips. I never realized the generosity that my exhausted and harried parents demonstrated by taking us on them.  To connect with cousins and grandparents, to learn something about the history and geography of our country, to give us shared experiences as a family were all great lessons and great experiences. It was cheap entertainment, on one level, as gas was 29 cents a gallon, campgrounds didn't charge us much, and we bought food in a grocery store and made sandwiches and lemonade at city parks along the way, which was good, because we couldn't have afforded anything more.

Whether we were driving to Watseka, Illinois, for Dairy Queen on a hot summer's night (dilly bars, 39 cents), or to Lincoln, Illinois, for a family funeral when it was so cold our great aunt couldn't be interred because the ground was too frozen, and the heater in the tan van didn't stand a chance of keeping us warm, we were having the shared experiences that comprised our youth.

Maybe that's what the road trip experience has come to mean for those of us in my family - some nostalgia-suffused combination of freedom, the wonder of new experience, and familial bond that we have tried to recapture.

But maybe that's just my view, why I love them, and what I have tried to recreate. Maybe that's what I'm hoping for when I'm driving west on US 56 outside of Clayton, New Mexico, watching the sunset behind the Rockies and seeing "purple mountain majesty" for myself; or when I'm waking up after spending the night in a rented Chevy Cavalier on a cold, foggy morning in Port Angeles, Washington.

Maybe I'm just hoping to see it forward this time, as an adult, instead of sitting on the engine, looking down at the map, choosing a path, and then looking up to see it roll away behind me, backward, gone before I saw it.
.
Posted by Bren in SoCal at 2/01/2011 08:33:00 PM