It’s the dry season so there is a lot of dust in the air over Dhaka, and visibility is limited to about a mile. Within that distance from my 8th floor window are more than 20 clearly identifiable construction sites. I feel like I’ve struck gold. Just like attending a wedding can tell you a lot about a country's religious and family life, I've found that observing a construction site can tell you a lot about a country, too: capitalization, labor supply and division, gender relations, even ritual. In Japan, every construction site had at least one employee - helmeted, uniformed and gloved - at pedestrian interface points to bow to passers-by, apologizing for the noise and dust. All employees were uniformed, hard hatted, and goggled, and all scaffolding was securely built and completely wrapped in mesh. The level of mechanization was very high with a lot of heavy machinery on every site, no matter how small, and the machinery was left on site, unguarded, where it was easily accessible and never accessed (well, except maybe for a drunk salaryman sitting in the driver's seat and moving the gears back and forth with boyish delight, which I saw one night in Gifu).

From this you could reasonably conclude that the Japanese culture valued order; that there was more capital than labor, or at least enough capital that most jobs could be done by machine; that it was tightly regulated society; that worker safety was paramount; and that property crimes and vandalism were not a common occurrence.

Well... Dhaka ain't Nagoya. At the site directly across the street from me, an eight story concrete and brick residential complex (below right) is being built completely by hand. I haven’t seen or heard one piece of equipment. Bricks are hauled up to the roof by pulley, concrete is mixed on the 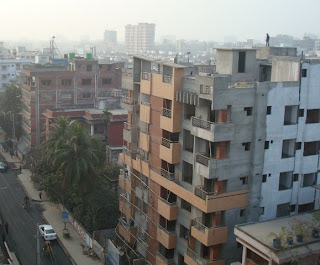 sidewalk in front with a hoe and water from a bucket, then it is scooped into baskets that women hoist to the top of their heads and carry around to the side of the building, then it is hauled up to where the work is being done. I could walk into the site anytime as it is completely open to the street, not cordoned or screened off in any way. It’s fascinating to watch, especially as I am on floor eight in a building that was most likely built in just the same way.

These housing blocks are built floor by floor, and as soon as some space in them is livable (i.e., the mortar has set and there’s a roof – no running water in the unit or even on site, usually; I see water hauled in by truck to fill the ground floor cistern, which is then tapped as needed to mix cement, to bathe, to brush teeth) workers move in.

In a country with insufficient housing stock and more labor than capital (by a large margin), it makes sense to build this way, of course. It employs people, and having enough work to go around is a challenge in the 7th most populous country in the world. It helps to redress the housing shortage, which is acute in Dhaka. There 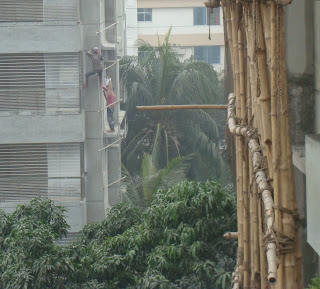 simply isn’t the means to buy heavy equipment to put up apartment buildings. The heavy equipment is purchased or leased from Japan or Germany in yen or euro that is lent to the government of Bangladesh from the development agencies of Japan or Germany or the ADB, who then fly in experts to run it. (And if it seems like the yen and euro don’t actually stay here, that’s true – the equipment stays here and the debt stays here, but the money doesn’t – it never arrives.) That equipment will be used to build infrastructure projects, like the new Padma (Ganges) bridge (eventually - it's currently on hold, and now, nationwide, there are no bridges from 100 km north of the capital to the sea). So it’s a cheap way to meet multiple needs.

It’s also dangerous. The scaffolding is bamboo tied with rope (right), and in none of the cases that I’ve seen is there a protective rail or net or, well, anything.

In the picture above, in addition to the typical bamboo scaffolding, you can see two workers on 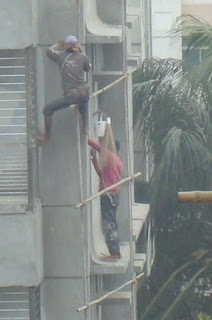 the building in the left background. They don't have more than what amounts to a bamboo ladder, with the rungs half a story apart. You see these everywhere in Dhaka. The guy in the dark shirt is two stories above the tree line so five stories up, doing something to that concrete seam. He and his colleague are both barefoot, and he is simply straddling the outside of the bamboo rigging as he works (bottom right).

It's a high wire act with no admission fee. I was fascinated, and very, very nervous for him until I realized that he was completely chill (and tremendously agile). It's also revelatory of Dhaka and Bangladesh: it's loosely regulated and less formal; it's poor in capital but rich in labor.

And it's not like there's a ton of choice. It seems to be the best way, given current constraints, to meet the immediate needs of a growing nation.

And I know that even on my longest, hardest, day, I'll never work as hard as these guys. Never.
.

Funny. I noted on my Facebook page some of your info on Banglandesh that I found fascinating. And here is what my friend responded with:

"You are not going to believe this, but the son and daughter-in-law of the Prime Minister of Bangladesh are neighbors of mine. Their daughter goes to Katie's preschool and the girls have had playdates. I pay little attention to the fact that they are pretty much the royal family of Bangladesh."

That is SUPER random! Huhn. Is that what comes with living in DC?

Love the comparison to Japan. Really drives home the point!