Almost every night I go for a walk. Some nights it’s easier than others, but so far, only once did I walk downstairs to my room after nine hours of reading and editing in the conference room, hunker down with reading and writing (and the Simpsons – on at 9:00 pm), and stay in for the night. When am I going to be here again? I like to go out and see what I can see.

There’s a lot to be seen.

When taking a walk in Dhaka, you have to keep alert. For starters, watch what’s above you. That's so you don’t electrocute yourself. Literally. There is a story in the paper every morning, literally, about someone who has died from electrocution, and while many of them were trying to run a line to those already strung up, I’m pretty certain that the wiring in Dhaka is not UL certified. In fact, I’m pretty certain a UL certifier would take one look, shake his or her head, and get back on 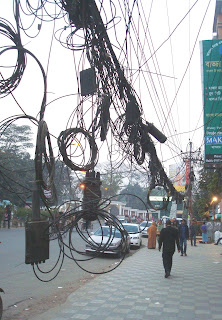 a flight out of town. If there are government regulations about the electricity, they are, like many other regulations here, ignored. And why not? The “government” has no power to impose a collective will on 15 million Dhakans, so people do what they like. The black electrical wires (left) that are hanging at head level, if you’re over 5’7”, which seems to be the median height here, are most likely not live. Most likely. Why take the chance? Keep your eyes open, look up, and duck, bob and weave as needed to avoid contact. You don’t want to be the guy they write about in the paper.

But don’t just look up – if you do that, you’ll likely break an ankle. You have to look down, too. Most of the main streets have sidewalks, of some sort, but those sidewalks are not in a particularly well maintained state. And they double as commercial space. Anyone who wants can throw out a blanket (or not), pay the local mob boss or corrupt politician or police officer (that part isn’t optional, according to my Bangladeshi acquaintances), and sell stuff.

From the main corner to my hotel (a distance of 600 meters), you can buy, in order: shoes, porcelain bathroom fixtures, peanut brittle of some kind, men's underwear, tires, oranges, belt buckles, deep fried dough (donuts?) of some kind, cigarettes of all kinds, bedroom furniture, haircuts, and between almost every one, eggs.

Whatever you want, presumably, except alcohol. What’s interesting is that everywhere there is retail commercial activity in Dhaka, there is an economy of agglomeration – one guy with a sidewalk stand selling men’s briefs will be surrounded by four or five others selling men’s briefs. (And how many men, walking home, soil themselves or otherwise need new briefs? Seems odd to me. They are also sold in 7-11s in Japan, so maybe I shouldn't be surprised.) This agglomeration isn’t just for sidewalk enterprises; even in the more formalized spaces for retail (a/k/a “malls” but they look and feel pretty different than the malls we think of) a watch shop, say, will be next to 4 or five others selling watches. Rickshaw down the road past the pet stores, and there are, literally, more than 30 pet stores - even more, the bird stores are all together, as are the reptile stores, the goldfish stores - you get what I mean. It's fascinating. There is no zoning requirement (zoning, in Dhaka?! Ha!) for this, it just seems to be naturally occurring.

My first semester in my MURP program at UH Mānoa, I was examining urban planning in a city in the Philippines and I presented to the class a case study of garbage collection. The city in question (I've forgotten which but it was the size of Indianapolis, so about a million residents) had acquired a fleet of garbage trucks through a one off grant from the Philippines national government, and with these there was now a closed system: garbage didn't go into the street, wasn't transferred multiple times (from residence/ business, to street, to truck, to collection point, to city garbage dump) - it was clean, efficient and hygienic. I thought this was a good thing for livability and public health, and saw it as a small but good step forward. That's how I presented it.

My prof ripped me a new one. "What about the people who make their living by going through the garbage for food and materials for recycle and sale? How many garbage pickers are now going to be unemployed - and thus face the very real threat of starvation - because they don't have access to this resource? Are there any provisions in the grant or the city plan to accommodate these people? How would you respond to a claim that this was a transfer of funds from a poor central government to the middle class?"

After I stood in front of the class for what felt like an hour, more or less imitating a goldfish, I stammered that I'd like to present again next week, if that would be okay, and do some more research. It was a great lesson for me - who are the stakeholders, and how are they affected? How are the poor affected by livability issues? I read about garbage pickers in the Philippines for a week, I presented again to the class, and that prof and I got to be on terms.

So there is garbage on the street. And it smells, and it's still winter here. I can imagine that in the summer, your senses would be frequently assaulted - on walks now, your senses are more... 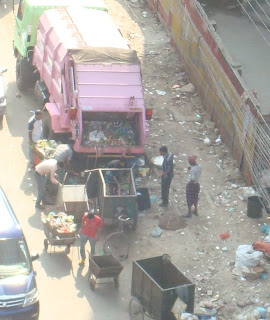 jostled (fumes from the furniture or tire shops, say) than assaulted really. But that garbage represents the livelihoods of many. Many. One night out to dinner with two colleagues, one American and one Bangladeshi, there was some confusion on the order and we got four dishes for the three of us. Despite our best efforts we couldn't finish it, so some food went back to the kitchen. I always hate to waste food, but in such a poor country as this it seems particularly offensive.

Walking home, I realized that the food we didn't eat would quite possibly be eaten by someone else, out of the garbage pile (depending on how it was thrown away); and if not then it most certainly would get eaten by a stray dog. People live off garbage - from home or business to street; from street to common neighborhood garbage heap; from garbage heap to truck (left) - at each stage the garbage is gone through and examined for anything that may be of use or may be scavenged, reclaimed and sold. As you walk, keep your eyes open for that.

And breathe through your nose. There is a lot of dust, lead, and fumes in the air, and you don't want that all to end up in your lungs, so breathe through your nose. And not only dust - Bangladesh has the 2nd worst air quality in the world, ahead of only India, and Dhaka has the worst in the world (click the link for some grim reading). Yes, you will blow disgusting black stuff out later, but where would you rather it be?

You will also want to be scanning from side to side as you walk. There are a number of small driveways and side alleys and an innumerable amount of people. Rickshaws, CNGs, cars, and men and boys carrying improbably large loads on their heads can enter and exit 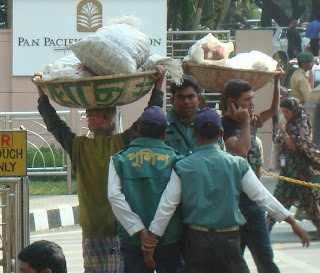 at anytime. Yesterday I was almost taken out by the metric equivalent of a 4' x 8' sheet of plywood - one of three simultaneously being balanced on the head of a worker, navigating down the narrow sidewalk. (Without an intervention by a thoughtful Bengali, I would have been - I had just glanced up at the wiring.) The gentlemen in the picture at the right are carrying what has to be their weight in produce. I want to rush to my chiropractor every time I see it. I have seen people carrying a roughly queen sized bed frame, a large bag of cement mix, a bundle of 8' (okay probably 2 meters, but you get me) long PVC pipe and aluminum poles, and bags of rice, many, many times. It's astounding. And it requires vigilance.

So - scan side to side to avoid losing an eye (or your whole head) to something being carried, scan at your feet to avoid stepping on someone's goods for sale or into something unsavory, scan at eye level and up for wires to avoid electrocution. And breathe through your nose. And if you feel like a slightly spastic bobblehead, then you're probably being appropriately aware.

One of my colleagues goes for a walk in the early morning, which he says is much more relaxing. It can't be less relaxing, though it might be less interesting. I'll try it, and see how it goes.
.
Posted by Bren in SoCal at 2/01/2012 09:34:00 PM