Missed story of the week 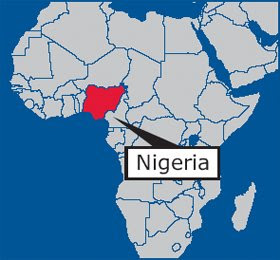 Here's the missed story of the week: Nigeria. (Link to the latest in the LA Times here.)

One reason Afghanistan was a near perfect harbor for Al Qaeda in the 1990's was that it was a failed state - central authority was nonexistent, the regions were largely autonomous, corruption was rampant, and a well-funded militia and training base or bases could be set up with impunity. More formally, a state is defined as failed if:


(Above from Radio Free Europe post here; below are some of the 12 Indicators of a Failed State found here.)

For nearly every indicator, Nigeria is foundering. 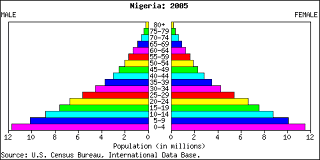 population pyramid. It's shocking. As I mentioned in a previous post, Nigeria is projected to add 118 million people - the equivalent of the population of Mexico - over the next 20 years. It simply does not have the carrying capacity to feed, clothe, provide fresh water, educate and provide health care for its current population, let alone its current population PLUS Mexico.

On a gini coefficient of inequality scale Nigeria isn't the worst, but the trend is in the wrong direction - inequality is growing. Oil wealth may not help - it has already lead to increased internal strife, sabotage of oil production facilities, and violence, and there is not enough central government authority to ensure that it is equitably distributed. Out of a population of 150 million people, there are 2.6 million infected with HIV/AIDS, the 2nd worst in the world. There are 250 ethnic groups in Nigeria, and the population is 50% Islamic, regionally centered in the north, and 40% Christian, mostly centered in the south. It is Africa's most populous nation, and it is in very real danger of falling apart.

Why does this matter?

To be simplistic, do we really need another failed state of Islamic extremists with access to oil reserves?

Beyond that, Nigeria is our fifth largest supplier of imported oil, and the disruption of that supply would put significant pressure on oil and gas prices here.

And more than that, Nigeria was a relatively stable, democratic nation which had been able to create material improvements in the lives of many of its people over the past three decades. So, in humanitarian terms, if Nigeria were to continue fracturing it would likely to do so along religious lines, with much bloodshed, internal and external displacement of local populations with resulting refugee crises like in Chad and Sudan, increased disease, collapse of what little social safety net there is, and starvation. In the Christian south there would likely be a rump Anglophonic state - failed like Liberia of the 90's or Zimbabwe today - with mineral resources but inadequate means of feeding its people or maintaining a "monopoly on the legitimate use of force." In the north there would be an Islamic national state with Sharia law as the basis for jurisprudence, which would likely be a natural harbor for enemies of the 20th and 21st centuries of the type that have attacked the U.S. in the past.

The potential disintegration of Nigeria would lead to death and hardship for literally millions of Africans, but it also has the potential to have implications for the United States and our security. And from what I saw in the paper and heard on the radio, it just wasn't very well covered.